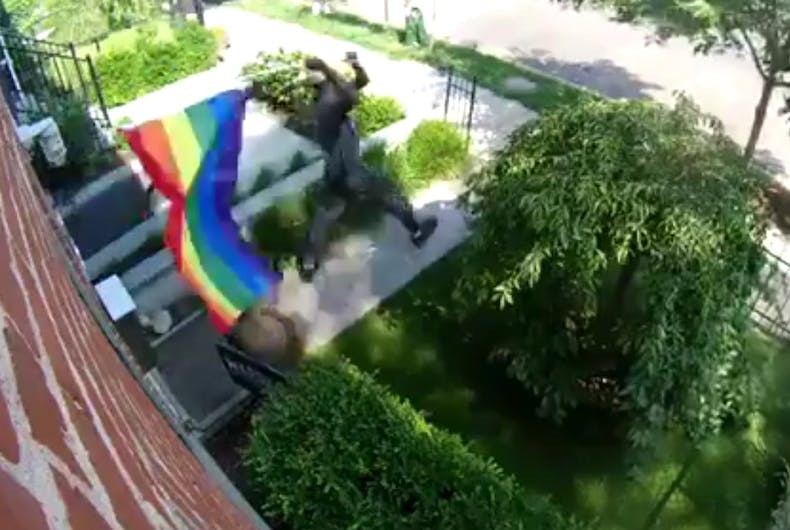 A man in D.C. was recorded tearing down a rainbow flag and beating it on the ground while shouting slurs.

Video was captured by a D.C. resident, who posted it to Twitter using the handle @mjasonrhoades and to the blog Popville.

In the video, a man can be seen walking down the street and then walking into the yard of a house where there is a rainbow flag flying.

The man grabs the flag and beats it on the ground. He can be heard shouting “faggot motherfucker” and “fucking faggots,” as well as other obscenities.

Related: A lesbian couple’s pride flag was stolen. Their neighbor’s response was incredible.

He then throws the flag to the sidewalk and walks away.

“This happened in broad daylight at our house on Independence at 17th St SE this morning while my wife was walking our dog,” wrote the person who posted the video.

. ⁦@PoPville⁩ ⁦@CMCharlesAllen⁩ ⁦@MayorBowser⁩ ⁦@DCPoliceDept⁩ This happened in broad daylight at our house on Independence at 17th St SE this morning while my wife was walking our dog. People like this should not be on our streets. pic.twitter.com/L6DEIrrbEp

D.C. Police officer Brett Parson told the Washington Blade that they have seen the video but haven’t been able to contact the person who posted it to social media.

“We saw the Popville post as well and have attempted to make contact with and have the property owner make a report,” Parson said. “They were encouraged to contact the LGBT Liaison Unit Duty Phone or call 911.”

A hater shouts at a Pride-goer in a disturbing viral video: ‘I’ll beat the gay out of you’