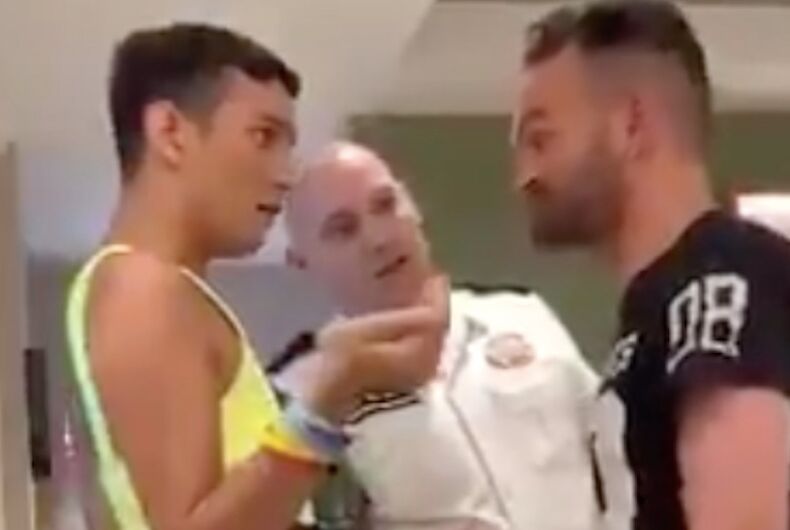 This last Friday during Pride weekend in Barcelona, Spain, a man at a McDonald’s threatened to “beat the gay out of” a gay man for wearing “disrespectful” cut-off jean shorts and a tight neon yellow tank top in public. A bystander took video of their encounter and though police soon intervened the queer man declined to press charges.

In the video (which has since been viewed over 4.2 million times), a security officer inside the fast-food restaurant speaks to a man wearing earrings and black t-shirt and jeans as he angrily confronts another man, expressing disapproval over his outfit.

The homophobe then says, “I’ll beat the gay out of you,” to which the other man responds, “You don’t have to say anything to me. I’m just grabbing my burger and eating it.”

The homophobe keeps saying, “Let’s go outside.” The other man says, “I haven’t done anything to you.”

Here is video of their encounter:

Gay Star News reports that the queer man signals that he’s dressed like he is because it’s Pride. In response, the homophobe says, “I don’t care what day it is, it is also a good day to punch you. Do you want to see? When you go out, I am going to hit you so hard your queerness will disappear.”

A local LGBTQ organization called Pride Barcelona has since encouraged the queer man in the video to file a report about the incident to the Observatory Against Homophobia, a regional organization which monitors anti-LGBTQ discrimination.

A man was caught on video tearing down a Pride flag, beating it & shouting slurs