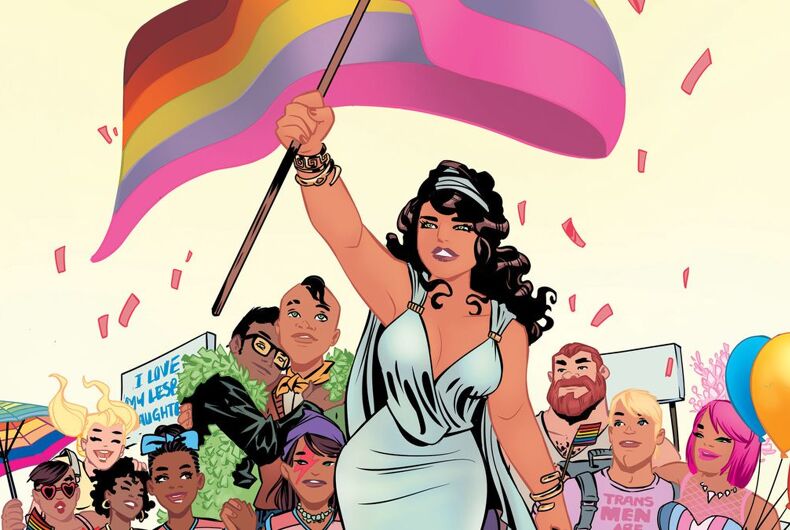 Artwork from the cover of the comic book, "Love is Love."Photo: Love is Love

In a recent personal column published by The Dallas Voice, Anna Waugh — a lesbian former English teacher at Irving High School near Dallas, Texas — said that her school banned Love is Love, an LGBTQ anthology comic book created to honor and fundraise for the victims of the 2016 Pulse Nightclub shooting. Waugh says the process to ban the book (and keep it banned) was sketchy and lacked accountability.

In the column, Waugh writes:

In the spring of 2018, my English I team at Irving High School decided to create a social justice graphic novel unit based on interests of our students.

What followed was the sudden removal of all six novels from the unit because of one LGBT-themed text. This was followed by silence from leadership, an eventual cover-up by the district, and a new policy gatekeeping teacher-selected materials.

Basically, Waugh and the English faculty had chosen the graphic novels to cover contemporary depictions of “bullying, sexual abuse, child labor, violence, the prison industrial complex and bigotry.” A school district grant paid for their purchase, and the principal initially supported their use.

However, when the books arrived and the library began laminating them for longer use, the principal entered and told the teachers to re-box them because of a complaint received by then Irving School District Superintendent Jose Parra.

Later, in a committee meeting called and attended by Parra and other librarians, an issue was reportedly made over Love is Love‘s “extreme homosexuality” even though the book contains no explicit sexual content.

Other books in this unit were also paperback, and they were all retained. As for ‘mature content,’ the back cover does suggest it be for ‘mature readers,’ yet high school falls under that category.”

When State Representative Rafael Anchia questioned Parra about the book’s removal following a sit-in at his legislative office, Parra reportedly denied knowledge of the incident even though Waugh and her colleagues had spent “hours on the phone” with his office about it.

When an influential leader from Dallas’ LGBTQ Resource Center contacted the Irving School District’s legal counsel about the issue, the counsel pointed to a newly created policy requiring that all non-approved texts be posted for six-weeks’ notice before being used in the classroom. This rule didn’t exist previous to Love is Love‘s banning.

Related: “Morally toxic” Scholastic books is the latest target of the religious right

To this day, Love is Love isn’t on any list of books officially banned by the district, the school’s GSA faculty sponsor is reportedly afraid to raise the issue for fear of professional retaliation and Waugh alleges that the school has “misplaced” correspondence and other records of the incident.

Waugh also says that the Comic Book Legal Defense Fund can’t act because any complaint must be filed by a teacher, student or parent (Waugh resigned at the year’s end), and the American Library Association’s Office of Intellectual Freedom is looking into the issue.