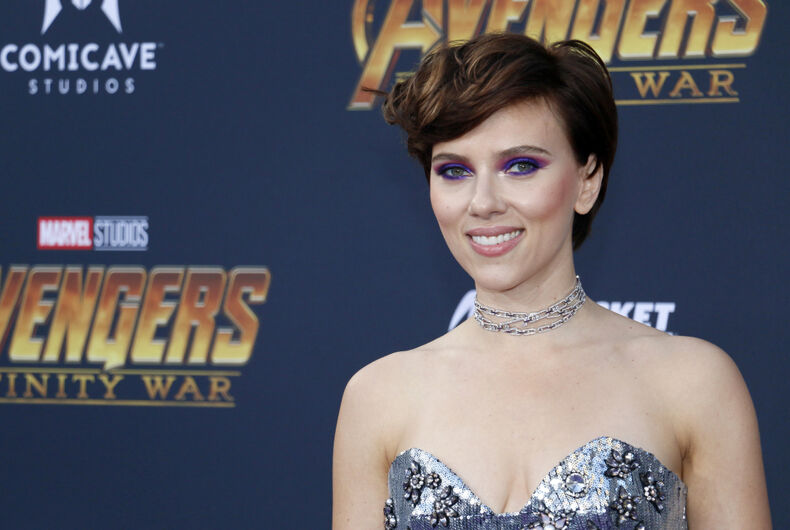 Actress Scarlett Johansson has drawn ire in the past for playing a whitewashed role in the film adaptation of the Japanese anime Ghost in the Shell and being cast as a trans man in a never-produced historical film, Hug and Tug, a role she later declined after backlash from the trans community.

But in a new interview with As If magazine, Johansson said she feels she should “be allowed to play any person, or any tree, or any animal,” a possible nod to her aforementioned acting controversies. Here’s her full quote:

You know, as an actor I should be allowed to play any person, or any tree, or any animal because that is my job and the requirements of my job. I feel like it’s a trend in my business and it needs to happen for various social reasons, yet there are times it does get uncomfortable when it affects the art because I feel art should be free of restrictions.

She later clarified her comments in a statement to Entertainment Weekly:

I personally feel that, in an ideal world, any actor should be able to play anybody and Art, in all forms, should be immune to political correctness. That is the point I was making, albeit didn’t come across that way. I recognize that in reality, there is a wide spread discrepancy amongst my industry that favors Caucasian, cis-gendered actors and that not every actor has been given the same opportunities that I have been privileged to. I continue to support, and always have, diversity in every industry and will continue to fight for projects where everyone is included.

Johansson was cast to play Dante “Tex” Gill, a real-life trans male owner of Pittsburgh “massage parlors” during the ’70s. When people criticized her for perpetuating “trans face” — that is, cis actors playing trans roles — Johansson’s rep snidely responded, “Tell them that they can be directed to Jeffrey Tambor, Jared Leto and Felicity Huffman’s reps for comment,” a reference to other cis actors who’d won awards by playing trans roles.

She later dropped the role (effectively killing the film) and subsequently said:

“In light of recent ethical questions raised surrounding my casting as Dante Tex Gill, I have decided to respectfully withdraw my participation in the project…. I’ve learned a lot from the community since making my first statement about my casting and realize it was insensitive. I have great admiration and love for the trans community and am grateful that the conversation regarding inclusivity in Hollywood continues.”

When gay, cisgender actor Matt Bomer played a trans sex worker in the 2018 film Anything, trans actress and filmmaker Jen Richards made a compelling argument that such roles perpetuate violence against trans women by reinforcing the idea that trans women are just cis guys playing dress-up.

Film producers often cast cis actors in trans roles to snag big name actors and because there are a limited number of trans actors with enough film experience to give producers their choice of age and body types. But all these problems are only perpetuated by not hiring trans actors.