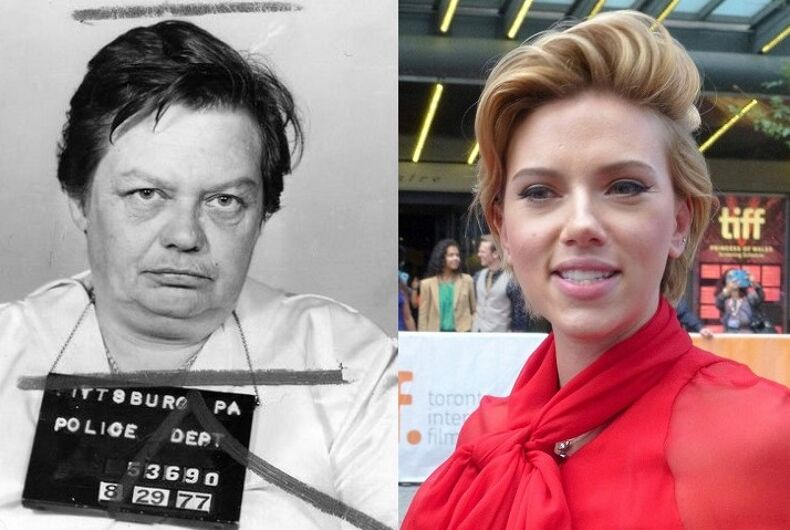 Scarlett Johansson will be playing the role of a transgender man in an upcoming Rupert Sanders film, and her response to criticism was dismissive.

The film Rub & Tug will be a biopic about Dante Gill, who ran massage parlors in Pittsburgh that were thinly-veiled fronts for illegal sex work in the 70’s and 80’s. Gill’s life was surrounded by violence – several of his associates were killed and one of his employees died when she opened a letter bomb that was meant for Gill.

So his life would make an interesting film, no doubt. The issue is that a cisgender woman was cast to play him.

Gill, who died in 2003, described himself as a man, told people to call him “Mr. Gill,” took a male first name, and “may even have undergone the initial stages of a sex change that made [him] appear masculine,” according to his obituary.

Johansson is a cisgender, straight woman, continuing the trend in Hollywood where actors of a different gender play the role of transgender people.

If Gill were a cisgender man, a woman would never be cast to play him. But since he was transgender – and Hollywood wants to show that he wasn’t really a man – a woman got cast in the role.

Johansson, for her part, decided to make matters worse by issuing a snide statement in response to criticism: “Tell them they can be directed to Jeffrey Tambor, Jared Leto, and Felicity Huffman’s reps for comment.”

She was referring to three cisgender actors who have all played transgender women: Tambor on Transparent, Leto in Dallas Buyers’ Club, and Huffman in Transamerica. Tambor won an Emmy for his role, Leto won an Oscar for his, and Huffman won a Golden Globe.

She seems to be saying, “All these actors got big, serious acting awards for doing this, and now I deserve one too.”

This isn’t the first time Johansson has been criticized for appropriating a role. In her previous collaboration with director Rupert Sanders, she played the character Major Motoko Kusanagi in a film based on a Japanese manga.

Johansson, who is perhaps best known for playing Black Widow in a number of Marvel Comics films, might be looking to be taken more seriously as an actor. There are better ways to accomplish that. For starters, she could respond to the entirely predictable questions she’s receiving with more thought and less sarcasm.