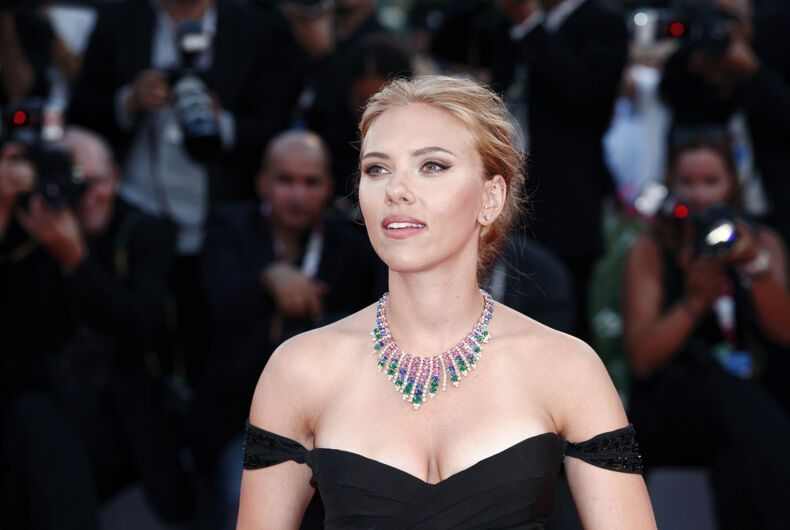 Actress Scarlett Johansson attends 'Under The Skin' Premiere during the 70th Venice Film Festival on September 3, 2013 in Venice, Italy.Photo: Shutterstock

Actress Scarlett Johansson has officially dropped out of portraying a trans man on the upcoming film Rub & Tug.

The role would have put Johansson in a prime role as a transgender man. The movie would have also teamed her back up with her Ghosts in the Shell director, Rupert Sanders.

Johansson’s decision to drop out of Rub & Tug followed severe backlash that reverberated throughout the LGBTQ community.

Transparent star Trace Lysette tweeted at the time: “I wouldn’t be as upset if I was getting in the same rooms as Jennifer Lawrence and Scarlett for cis roles, but we know that’s not the case. A mess.”

Oh word?? So you can continue to play us but we can’t play y’all? Hollywood is so fucked… I wouldn’t be as upset if I was getting in the same rooms as Jennifer Lawrence and Scarlett for cis roles, but we know that’s not the case. A mess. https://t.co/s8gBlBI1Sw

Actors who are trans never even get to audition FOR ANYTHING OTHER THAN ROLES OF TRANS CHARACTERS. THATS THE REAL ISSUE. WE CANT EVEN GET IN THE ROOM. Cast actors WHO ARE TRANS as NON TRANS CHARACTERS. I DARE YOU #RupertSanders @NewRegency #ScarlettJohansson https://t.co/RkrW8MeGcG

“In light of recent ethical questions raised surrounding my casting as Dante Tex Gill, I have decided to respectfully withdraw my participation in the project,” Johansson told OUT exclusively.

“Our cultural understanding of transgender people continues to advance, and I’ve learned a lot from the community since making my first statement about my casting and realize it was insensitive,” she added.

“I have great admiration and love for the trans community and am grateful that the conversation regarding inclusivity in Hollywood continues,” Johansson said. “According to GLAAD, LGBTQ+ characters dropped 40% in 2017 from the previous year, with no representation of trans characters in any major studio release.”

Scarlett Johansson will no longer star in “Rub and Tug,” an upcoming film about transgender massage parlor owner Dante “Tex” Gil, after swift backlash followed the announcement of her casting. https://t.co/QzgjawSaUD

Johansson said she would have “loved the opportunity to bring Dante’s story and transition to life,” but understood why many felt “he should be portrayed by a transgender person.”

She concluded, “…I am thankful that this casting debate, albeit controversial, has sparked a larger conversation about diversity and representation in film. I believe that all artists should be considered equally and fairly.”

Politics may influence religion more than the other way around