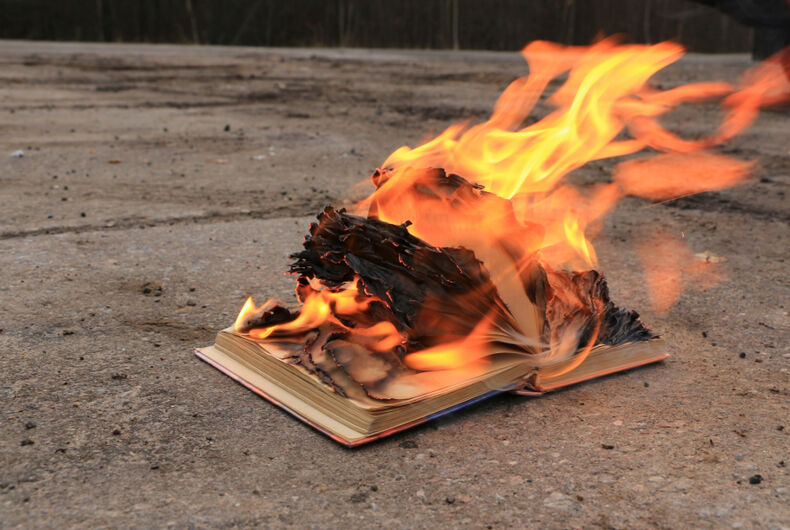 As wisely and eloquently stated by English author Edward Bulwer-Lytton in his 1839 play, Richelieu; Or the Conspiracy, “the pen is mightier than the sword,” this adage holds that the written word is a powerful tool in the transmission of ideas. Why else would oppressive regimes and other ruthless upholders of the status quo engage in censorship and book burning throughout the ages?

For example, Pope Gregory IX in 1239, in his quest to maintain the Catholic Church’s economic and ideological stranglehold, ordered all copies of the Jewish holy book, the Talmud confiscated, and one of his successors, Pope John XXI, commanded that the Talmud be burned on the eve of the Jewish Passover in 1322.

The Christian “reformer,” Martin Luther, in his 1526 treatise On the Jews and Their Lies, argued:

“First, their synagogues should be set on fire.” Jewish prayer books should be destroyed, and rabbis forbidden to preach. The homes of Jews should likewise be “smashed and destroyed” and their residents “put under one roof or in a stable like gypsies, to teach them they are not master in our land….These poisonous envenomed worms should be drafted into forced labor. The young and strong Jews and Jewesses should be given the flail, the ax, the hoe, the spade, the distaff, and the spindle and let them earn their bread by the sweat of their noses.”

As Luther’s dire pronouncement make perfectly clear, what begins as torching of books and other property eventually results in the denial of civil liberties, torture, and eventually murder of people scapegoated by the dominant social groups and by their governmental leaders.

This was certainly the case in Nazi Germany. In 1933, Nazi storm troopers invaded, ransacked, and closed The Institute for Sexual Sciences in Berlin, founded by Dr. Magnus Hirschfeld, a Jewish and homosexual sexuality researcher. The Institute conducted early sexuality research, the precursor of the Indiana-based Kinsey Institute in the United States.

Storm troopers carried away and torched over 10,000 volumes of books and research documents calling the Institute “an international center of the white-slave trade” and “an unparalleled breading ground of dirt and filth.”

The German Student Association declared a national “Action against the Un-German Spirit.” On May 10, 1933, the students along with Nazi leaders set ablaze over 25,000 volumes in Berlin’s Opernplatz. Joseph Goebbels, the Reich Minister of Propaganda, “fired” up the crowd of over 40,000 sympathizers by declaring, “No to decadence and moral corruption. Yes to decency and morality in family and state.”

More recently in the United States, Pastor Terry Jones of the misnamed Dove World Outreach Center, a non-denominational church in Gainesville, Florida, called for an “International Burn a Quran Day,” September 11, 2010, the ninth anniversary of the attacks.

Talking to CNN’s Rick Sanchez, Jones declared: “We believe that Islam is of the devil, that it’s causing billions of people to go to hell, it is a deceptive religion, it is a violent religion and that is proven many, many times.” Jones is also the author of the book, Islam Is of the Devil.

This policy and action are offensive to all of us who believe in religious liberty. To stereotype and scapegoat all followers of Islam for the events of 9/11 is as invalid as blaming all Christians for the despicable actions perpetrated by Timothy McVeigh, the Oklahoma City bomber who was a devout Christian.

Now we witness reports of anti-LGBTQ Christian crusader, Paul Dorr – founder of Rescue the Perishing, a group “contending against moral evil to advance the Kingdom of Christ” – who checked out four LGBTQ-inclusive children’s books from the Orange City, Iowa Public Library and torched them in a 27-minute October 2018 video diatribe over Facebook.

The books in question were Two Boys Kissing, by David Levithan; Morris Micklewhite and the Tangerine Dress, by Christine Baldacchino; This Day In June, by Gayle E. Pitman; and Families, Families, Families!, by Suzanne and Max Lang.

In his Facebook video rant, Dorr argued that Two Boys Kissing was “designed to get 12-to-13-year-old boys to start having homosexual sex together.”

Recently, an Iowa court judge refused to drop all charges filed against Dorr over his claims of exercising his rights to freedom of speech.

It is no mere overstatement to place Pastor Terry Jones and Paul Dorr’s actions within the context of book burning through the centuries. For as Santayana reminds us: “Those who do not learn from history are doomed to repeat it.”

Are LGBTQ people more at risk for Alzheimer’s?

Watch the first same-sex couple get married in Ecuador