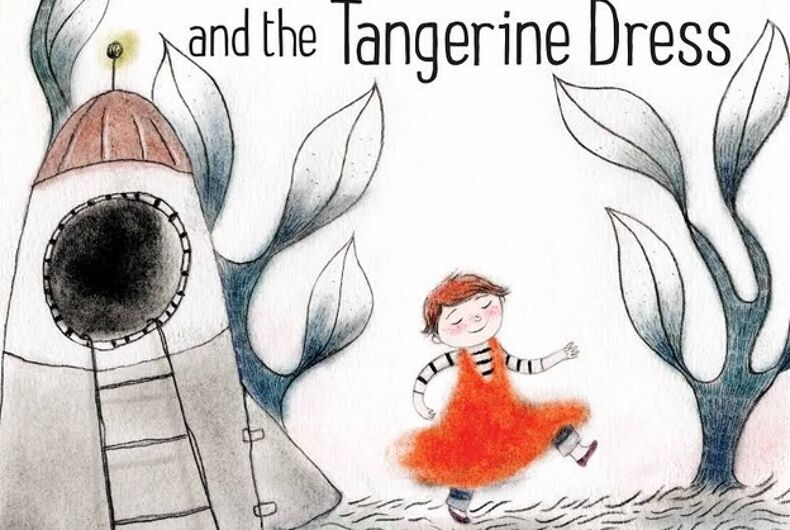 "Morris Micklewhite and the Tangerine Dress" was one of the books burned in the video.Photo: Christine Baldacchino/Isabelle Malenfant

A library in Iowa is looking at legal options as a video surfaced of a Christian conservative burning LGBTQ library book.

Most of the video shows Dorr reading a blog post entitled “May God And The Homosexuals of OC Pride Please Forgive Us!” that he posted on the website of the organization “Rescue the Perishing.”

The blog post is a conservative rant against “the culture,” which he calls “bad enough.”

“Once they blasphemed the transcendent God as ‘myth’, then the revolutionaries attacked God’s precepts and laws governing sex as mere ‘mythology’ with the necessary arrogance and ridicule added to it,” he wrote.

“Private, loving and intimate marital union became naturalistic and animalistic -not any different than any other bodily function. Oh, such degradation they’ve brought us.”

At the end of the video, he burned four LGBTQ-affirming books that he said he checked out from the local library: Two Boys Kissing, by David Levithan; Morris Micklewhite and the Tangerine Dress, by Christine Baldacchino; This Day In June, by Gayle E. Pitman; and Families, Families, Families!, by Suzanne and Max Lang.

“Frankly, I found it disgusting,” said Mark Stringer, executive director of the ACLU of Iowa. “We are disturbed to see this.”

“Burning books from a public library is a clear attempt to shut down the open sharing and discussion of ideas. It’s one person, or maybe a group, deciding that they’re the gatekeeper of ideas for the rest of the public.”

Amanda Vazquez, director of the Orange City Public Library, said that the library’s board has spoken with authorities to determine the “next steps,” which may include legal action against Dorr.

The Orange City Police Chief said that they are investigating the matter, but did not want to comment on it.

In a statement, the local organization OC Pride said, “It is disappointing to see folks break the law in a community where we believe abiding by the law keeps everyone safe.”

Dorr refused to talk to the press about his book burning.

Rosie O’Donnell got engaged to a police officer