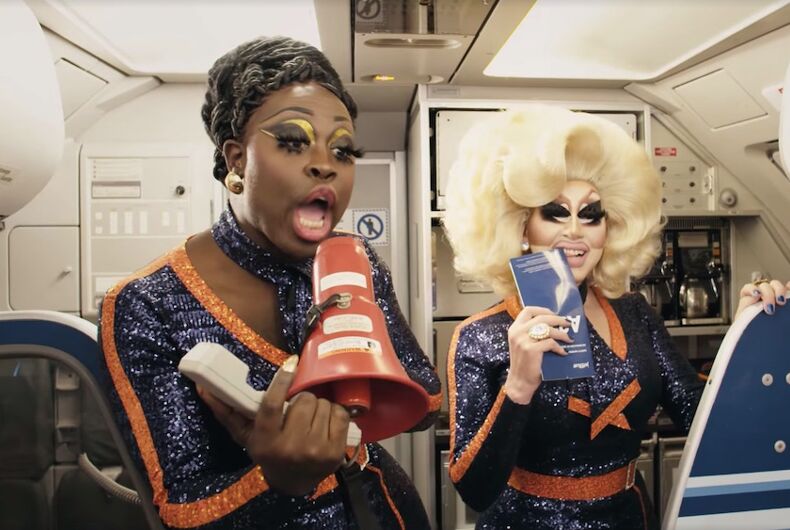 They’ve wrangled Bob the Drag Queen and Trixie Mattel — the winners of RuPaul’s Drag Race season eight and All Stars 3 respectively — to put on skin-tight, highly sequined uniforms and unveil JetBlue’s newest jet. It’s named “Shantay Blue Stay,” a play off of “Shantay, you stay,” RuPaul’s catchphrase for whenever she allows a talented queen to stay on her show.

Because they’re both comedy queens, Bob and Mattel both serve up laughs in JetBlue’s new Pride month ad, but be warned: Bob will have your fingers removed if you keep pressing that “Call flight attendant” button.

In the promo, Bob and Mattel mix some sass, style and sexual innuendo into the usually boring pre-flight instructions. Early on — after Mattel works the walkway, showing some “leg room realness” — Bob tells passengers to tuck their personal items under the seat in front of them.

“And if your items are a little too big to tuck,” he jokes, “then God bless you.”

Also, Bob would like to remind everyone, “Restrooms are located at the rear of the plane… You can’t pee up here.” And if there’s an emergency evacuation from the aircraft, don’t bring your carry-on items with you, “Because whatever you carried on, it can’t be that important.”

The most hilarious part of their instructions comes near the end when Bob informs everyone (with mock enthusiasm), “For the service portion of this flight, we will be serving a small bag of pretzel dust that you have to share with your neighbor!”

She’s just kidding, of course, as JetBlue lets passengers have as many bags of complimentary snacks as they like, and not just “pretzel dust” either, but Cheez-Its, TERRA potato chips and Belgian Boys Choc O’ Chip Cookies.

Yes, it’s all just an ad for JetBlue, but the company deserves a bit of community love as it has a perfect 100 Corporate Equality Index rating from the Human Rights Campaign both for its LGBTQ-supportive workplace policies and its numerous donations to LGBTQ community organizations.

After football players burned a pride flag, this high school is responding perfectly