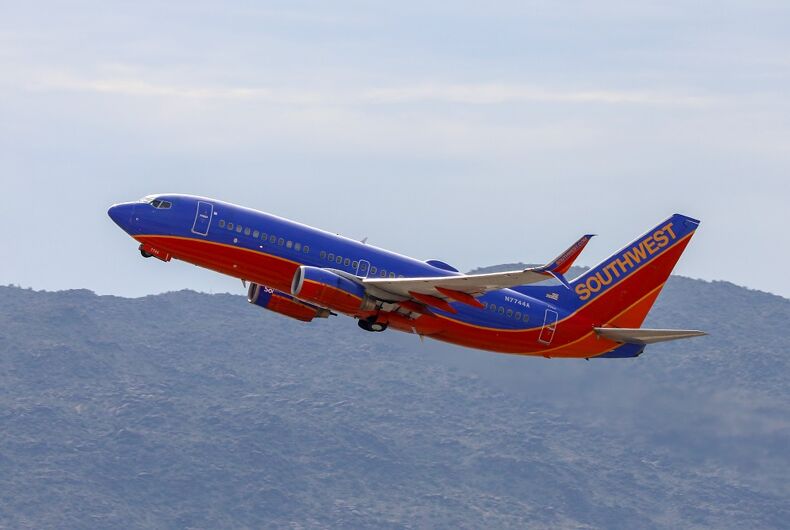 Southwest Airlines is updating its family boarding policy to be inclusive of LGBTQ families.

The policy now says that a child under the age of 6 can be accompanied by “two adults.”

The previous policy just said “an adult,” which left the question of kids traveling with two parents to the gate attendants.

Grant Morse, 56, faced what he called discrimination at the gate in 2017 when he was traveling with his husband, his mother, and their three children. They tried to board and the gate attendant let a straight couple with a kid in just before them, but then they were stopped.

Related: Delta refused to let a deaf LGBTQ couple board their flight after they asked to sit together

“She said, ‘This is not for you,’” Morse said. “It was clearly discriminatory behavior. We were clearly profiled.”

The family had to wait for everyone else to board the plane and had to sit separately because there weren’t seats for them together.

Southwest denied that this was a case of discrimination, but offered an apology and a $300 voucher.

In another incident in 2017, 90210 star Annalynne McCord tweeted that friends of hers were told by Southwest Airlines that “they didn’t count as a family.”

“Your employees made it clear that these beautiful little girls and their fathers were not in fact ‘family,’” she wrote.

Morse contacted an attorney to try to push Southwest to change their policy, and said that he is “happy” that they have made the change.

He hasn’t flown with Southwest since 2017.

“Where we are today, we are reconsidering,” he said.

Why are WWE wrestlers bashing gays instead of each other?