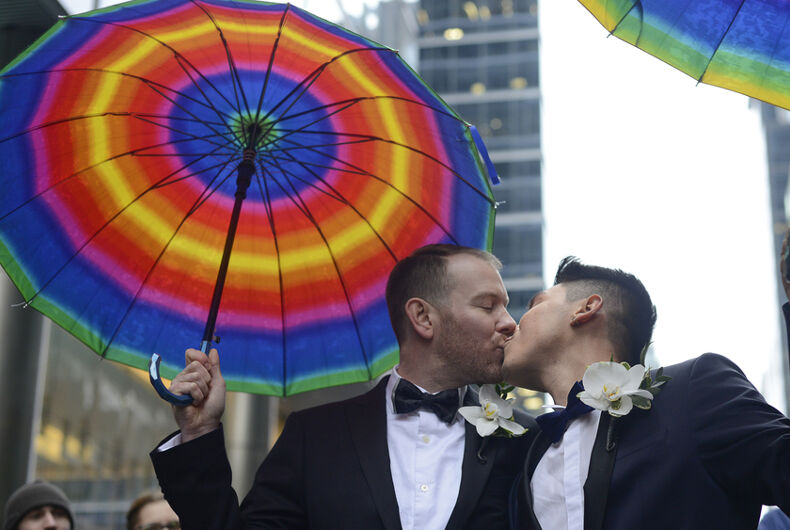 A trans couple kisses each other in front of Trump TowerPhoto: Shutterstock

Unable to discuss the Equality Act with any intellectual honesty, U.S. House Republicans are trying to add all sorts of “poison pill “amendments to make the sweeping LGBTQ rights bill distasteful to its authors. One amendment, which came from Arizona Rep. Debbie Leskowho, proposed changing the Equality Act’s name to the “Forfeiting Women’s Rights Act.”

The Equality Act would add sexual orientation and gender identity to the Civil Rights Act of 1964, which would ban discrimination against LGBTQ people in housing, employment, public accommodations, education, credit and several other areas.

Related: Hate groups have come unhinged over the Equality Act. You won’t believe what they’re saying.

Of the poison pill amendments, The Washington Blade writes, “Republicans proposed 28 of those amendments, many of which are anti-trans in nature or seek to broaden the religious exemption in the bill to allow anti-LGBT discrimination.”

Among their proposed amendments are ones making sure that the Equality Act can’t “be construed to grant or secure any right relating to abortion or the provision or funding thereof,” an amendment to keep trans women from competing in women’s sports and another amendment granting public businesses, schools and religious establishments (including charities and universities) the right to refuse service and facilities to LGBTQ people.

Related: Sally Field speaks out for the Equality Act in a heartwarming video you have to watch

Republicans have also added a bunch of other amendments specifically targeting trans children. One amendment seeks to ensure that “parents’ custody of their child is not threatened by them simply questioning their child’s gender identity.” Another says the act cannot “deny a parent the right to be involved in their minor child’s medical care.” And yet another says “nothing in the act shall require physicians [and mental health providers] to affirm and provide treatment for minors who request gender transition treatment.”

Luckily, since Democrats are in charge of the House Rules Committee, these amendments have almost zero chance of actually making it into the final bill. But seeing as Republicans rule the Senate, the Equality Act also has zero chance of becoming law anytime soon.