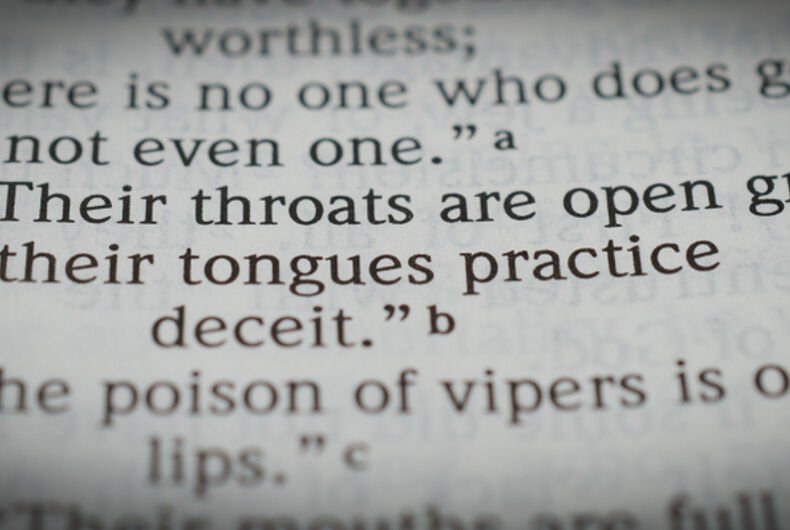 Democrats have introduced the Equality Act, aiming to include “sexual orientation” and “gender identity” to the classes protected against discrimination by the Civil Rights Act of 1964 — and hate groups want you to be scared.

In a lengthy opinion piece by Kristen Waggoner of the Alliance Defending Freedom, the Equality Act will somehow strip hard-won rights away from women in sports, bringing up the latest villain in LGBTQ rights, the non-existent superstar transgender athlete who is winning all the sports competitions

Labeling gender identity as an ideology, Waggoner argues that her gym’s locker room will be packed with “intruding males,” invading her privacy in a publicly accessible changing area.

“This isn’t just about a male-tilted playing field,” says Waggoner. “If gender-identity ideology becomes the law of the land, women in all walks of life will suffer the consequences of the blatantly sexist notion that a man who adopts stereotypical feminine roles, behaviors or clothing must be treated in all respects as a woman.”

Tony Perkins over at the Family Research council agrees, fearing that the Equality Act would “destroy” the first amendment right to be a terrible person. No, really, Perkins’ argument is just that, saying via a statement that “one man’s ‘intolerance’ is another man’s religious freedom.”

Perkins, in his FRC press release/opinion piece has whipped a full-on series of LGBTQ fever dreams, trying to come up with his worst possible outcomes under the Equality Act.

“Picture walking into your child’s preschool for mandatory transgender story hour,” Perkins suggests. “Or think about your teenage daughter finishing gym class and being forced to shower and change with biological boys. Imagine being fired for calling someone “him.” Or maybe you’re standing over the counter of your new store, holding a subpoena because the “nonbinary” you interviewed wasn’t the best candidate for the job. These aren’t hypotheticals. This is the reality of a nation that embraces the phony “equality” liberals are selling.”

The Catholic League chimed in as well, fearing that the Equality Act will lead to “affirmative action” for LGBTQ people. Or as their leader, Bill Donohue calls LGBTQ people, “homosexuals and the sexually confused.”

“For example, religiously devout parents may rightly object to having their children counseled by a woman who has acquired male genitalia. In normal times, this would not be controversial. Sadly, we live in abnormal times.”

These hatemongers do have one ally amongst democrats: Joe Manchin (D-WV) who is the sole Democratic holdout on the bill. For him, though, it’s not fears of transgender story time or the “religious freedom” to be intolerant, but his concerns that the bill would override local controls.

“I strongly support equality for all people and do not tolerate discrimination of any kind. No one should be afraid of losing their job or losing their housing because of their sexual orientation,” said Manchin in his statement on the Equality Act. “I am not convinced that the Equality Act as written provides sufficient guidance to the local officials who will be responsible for implementing it, particularly with respect to students transitioning between genders in public schools.”

At least twenty-two states as well as many major cities and localities have enacted laws prohibiting discrimination on the basis of sexual orientation or gender identity.

The Equality Act, which would modify existing civil rights legislation to ban LGBTQ discrimination in employment, housing, education, federal programs, public accommodations and elsewhere, was first introduced in 2015, and is based on a bill introduced during the Nixon Administration by Representative Bella Abzug (D-NY).