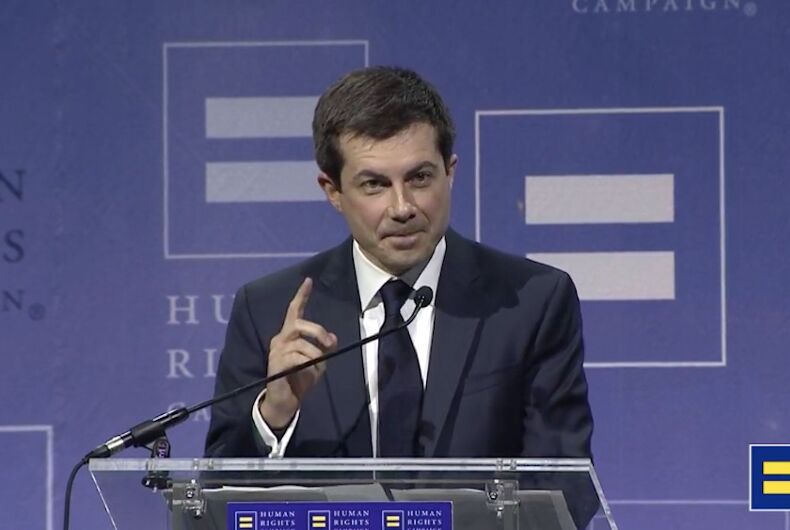 During his keynote address at the Human Rights Campaign’s Las Vegas gala yesterday, Pete Buttigieg described his coming out and how it taught him about the importance of building bridges between people with different experiences.

He began, “When it comes to coming out, everyone’s got their own story. Mine is one of taking a long long time to come out, even to myself. And once I did, I started to tell friends after being elected mayor of my hometown. It was easy to drag my feet on telling anyone else. After all, I had a demanding job, not a lot of time for a personal life and the city was a jealous bride. But what happened is I realized I wasn’t getting any younger.”

In order to contextualize his coming out story, it’s important to know a little history. From 2009 to 2017, Buttigieg served as an intelligence officer in the U.S. Navy Reserve. During that time, he was elected mayor of South Bend, Indiana in 2011 and was reelected in 2015. He deployed for the U.S. invasion of Afghanistan in 2014, and in a June 2015 column in the South Bend Tribune, Buttigieg came out as gay.

In the speech, Buttigieg described his decision to come out. He said, “By the time I stepped away from the mayor’s office, on leave to serve in Afghanistan, I was seized with the awareness that I could be killed in action at the age of 33, a grown man and an elected official, with no idea what it was like to be in love. I knew that I had to be who I am.”

As Rachel Maddow once pointed out during her interview with Buttigieg, he had already finished grad school, had a job, got elected mayor and did a tour in Afghanistan before he came out at 33-years-old.

He added that his coming out occurred in the middle of a reelection campaign, and so he wondered whether the citizens of his city would embrace or reject him for his sexual identity. In the end, he was reelected with 80 percent on the vote.

Related: How Chasten Buttigieg overcame homelessness after his family rejected him for being gay

Later on in his HRC speech, Buttigieg added, “What every gay person has in common with every excluded person of any kind is knowing what it’s like to see a wall between you and the rest of the world and wonder what it’s like on the other side.”

But he clarified that he was “not talking about pretending there are equivalencies between the different patterns of exclusion in this country.”

He continued, “When an auto worker, 12 years into their career, is no longer sure how to provide for their family, they’re not part of the country we think of ourselves as all living in together. That’s why we can’t seem to get on the same page.”

Lastly, he said, “[Trump has] mastered the practice of the most divisive form of such politics, which is white identity politics, designed to drive apart people with common interests. What I worry about is not the president’s fantasy wall on the Mexican border that’s not going to get built anyway. What I worry about are the very real walls that we are putting up between us as we get divided and carved up.”

Here’s a video of his speech below: