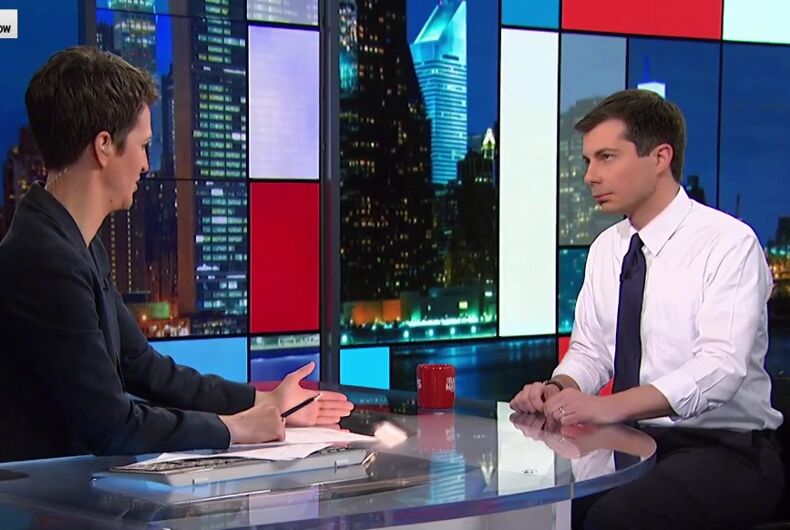 South Bend Mayor Pete Buttigieg appeared on The Rachel Maddow Show on MSNBC last night, and Maddow asked him about what it was like to come out so late in life.

Buttigieg, she pointed out, had already finished grad school, had a job, got elected mayor, and did a tour in Afghanistan before he came out at 33-years-old.

She said that she wasn’t criticizing him for coming out at 33, but, she said, “I think it would have killed me.”

Buttigieg said that, first, it took him a long time to really even understand that he is gay.

“I really needed to not be,” he told Maddow. “There’s this war that breaks out I think inside of a lot of people when they realize that they might be something they’re afraid of.”

Related: Rachel Maddow is now the most watched cable TV anchor in the nation

But he eventually understood that he was gay and lived for a few years in the closet. He said that his jobs took up a lot of his time – he said he had “no dating life” – but then it was his tour in Afghanistan that changed his outlook.

“It was really the deployment that put me over the top,” he said. “I realized that you only get to be one person. You don’t know how long you have on this earth. By the time I came back I realized, I gotta do something.”

He came out publicly in an op-ed in the South Bend Tribune, and he said that he assumed it would be harder to get reelected. Instead, he got reelected with over 80% of the vote.

“One day, the way this will work, when the mayor is trying to figure out how to come out, you go to the next rubber chicken you’re going to and your date’s the same sex. And that’s that,” he said. “People shrug, figure it out, and get on with the evening.”

At the end of the show, MSNBC host Lawrence O’Donnell asked Maddow about Buttigieg’s answer.

“Everyone’s path to [coming out] is different,” she said.