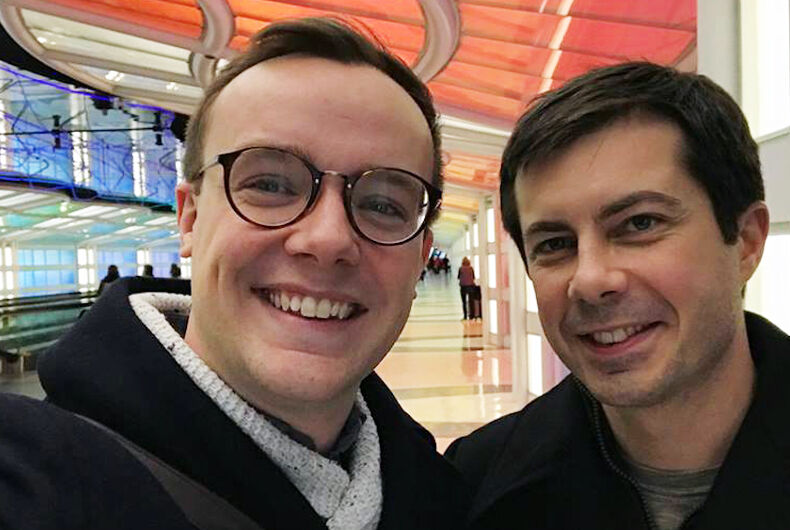 In an interview with The Washington Post, Chasten Buttigieg, the 29-year-old husband of out gay presidential candidate Pete Buttigieg, revealed that his brothers both rejected him when he came out as gay. He ended up being homeless and working at a Starbucks just to afford health insurance before he eventually went on a life-changing date with Pete.

Chasten was born the third child of a poor nursing assistant mother and landscaper father. His older brothers, Rhyan and Dustin, were athletes and hunters.

The Washington Post writes, “While they were out chopping wood with their dad, Chasten says, ‘I would be inside reading Harry Potter or singing Celine Dion at the top of my lungs while my mom and I were dusting the cabinets.'”

Around adolescence, when he eventually realized he was gay, Chasten said he was “itching and clawing to try to change whatever brain chemistry was making me the way I was.” School bullies called him homophobic slurs and threw him around by his backpack. He finally admitted being gay during his senior year abroad in a German foreign exchange program.

Some of his friends accepted it, others told him God didn’t approve and that he should “choose” not to be gay. Later that year, he was sexually assaulted by an acquaintance at a house party. Later on, he eventually came out to his family.

His mom cried and asked if he was sick. His brother said, “No brother of mine…” And so Chasten left his home, began couch surfing at friend’s places or sleeping in his car in the parking lot of the community college where he was taking classes. He also worked several jobs, including one at Starbucks until he was held up at knife-point.

In this way, Chasten became one of the 40% of homeless youth who identify as LGBTQ, many of whom are rejected by their families.

Months later, Chasten’s mom called him, asking him to return home. He did, and his parents accepted him. His brothers never did.

His brother Rhyan became a pastor of a Christian church in Clio, Michigan. He told The Washington Post, “I want the best for him. I just don’t support the gay lifestyle.”

Chasten has no relationship with his brothers. Sometimes Chasten and Pete received “nasty, homophobic letters sent to their home,” but more often people thank them for being the most openly gay visible couple ever to grace American politics.