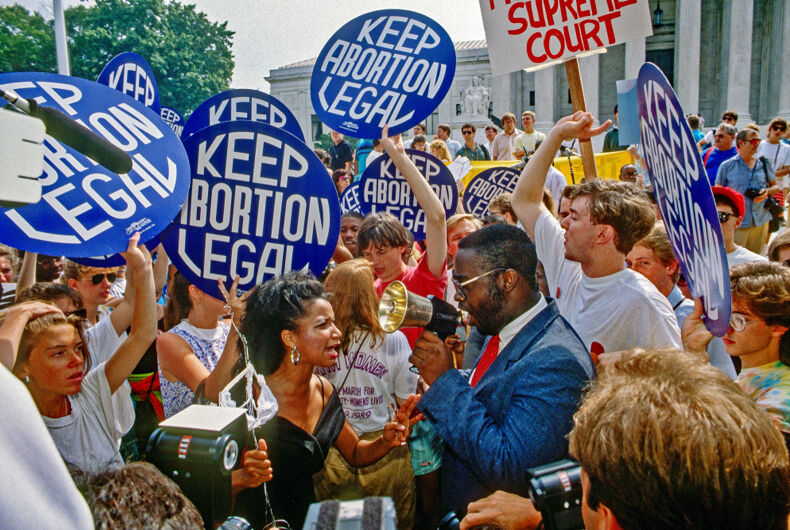 Georgia became the fourth state following Mississippi, Kentucky, and Ohio to pass so-called fetal heartbeat legislation banning abortion as soon as the fetus’ heartbeat can be detected (approximately six weeks). At that point, supporters conclude that the fetus is a person. The additional states of Florida, Missouri, Arkansas, Minnesota and Tennessee are all currently considering similar legislation as well.

So now that legislators have determined that women are mere vessels carrying a full human being – even though at six weeks women may not even realize they’re pregnant – several community standards must change along with the laws.

Now pregnant women must be allowed to travel within the express carpool highway lanes restricted to at least two humans per vehicle; their votes must now count twice in local, state and national elections; they should either be able to claim two exemptions on their tax forms or  be compelled to complete two separate forms.

Maybe they should have to purchase two tickets to enter theaters and sporting events; be considered as constituting “double occupancy” on ocean liners and in hotel rooms; employers must double their annual time off from work and pay them double for overtime.

They should be forbidden to marry since the law states that only a couple (two people) shall have the right to marry and marrying while pregnant would set the precedent of three. Maybe we should “grandfather” into the equation the annulment of all unions in which at least one of the people was pregnant during the ceremony.

Are Republicans pro-life or just pro-control?

“The Republican Party must continue to uphold the principle that every human being, born and unborn, young and old, healthy and disabled, has a fundamental, individual right to life,” says the Republican National Committee for Life.

“Faithful to the ‘self-evident’ truths enshrined in the Declaration of Independence, we assert the sanctity of human life and affirm that the unborn child has a fundamental individual right to life which cannot be infringed.”

Though the Republican Party might have an interest in bringing pregnancies to term in nearly all situations – even in instances of rape and incest, and regardless of the wishes of the women involved — even a cursory investigation of the Party’s stands and actions on the major issues of the day, proposed and acted upon by current Republican legislators and executives on all levels, gives us a picture of a Party that is anything but “pro-life.”

In actuality, the GOP conducts itself as a Party that stands for life until birth; then one is left to fend for oneself.

Under its conception of being “pro-life,” in its policies and accumulated legislative actions, the GOP has (time and time again) attempted to rescind and reverse the historic Affordable Care Act, which would make an estimated 50 million Americans uninsured to a point where their only healthcare option is the hospital emergency room. ER visits end up costing the remainder of taxpayers since the GOP adamantly refuses to provide a single-payer government healthcare system.

Instead, Republicans force us to accept the exorbitant profit-motive insurance premium rates of private healthcare providers.

The GOP votes against raising government student assistance programs, even as college and university tuitions increase, resulting in excluding deserving working- and middle-class students from attending institutions of higher learning.

The GOP has consistently tried, and in many instances succeeded, in circumscribing the basic rights of citizens to participate in the electoral process following the conservative-controlled Supreme Court’s decision to strike down sections of the 1965 “Voting Rights Act.”

Under its conception of being “pro-life,” the GOP has consistently cut governmental entitlement programs, thereby eliminating safety net support systems from our elders, young people, people with disabilities, people who’ve suffered hard times and others struggling to provide life’s basics.

The GOP fights at every turn to pass legislation restricting immigration as well as social and educational services from young people.

The GOP attacks the rights of women to control their own bodies. This attack happens as doctors and others are intimidated, even shot and killed at family planning clinics. Since these women have already been born, the GOP has lost its concern for their choices and well-being.

The GOP attempts to deny basic human and civil rights to LGBTQ people, rights that are routinely afforded to heterosexual people daily.

So when the party argues it will fight for the rights guaranteed in the Fourteenth Amendment for embryos and fetuses t0 receive “equal protection under the law,” it is not interested in extending these rights to LGBT people, as evidenced by its staunch opposition to marriage equality and its promotion of so-called “Religious Freedom Restoration” acts granting people the right to discriminate on “religious” grounds.

Under its conception of being “pro-life,” the GOP fights to abolish affirmative action programs branding them as nothing more than “reverse discrimination” even though such programs have improved the lives of people of color and women, giving them with increased access to long-denied educational and employment opportunities.

The GOP desires to privatize our national parks and loosen environmental and consumer protections of all kinds, as advocates for mining, petroleum, natural gas and lumber companies exploit the land. The GOP simultaneously works to hand over enormous tax breaks and subsidies to these industries.

The GOP battles for school vouchers to funnel money into parochial institutions at the expense of public education while lobbying to reintroduce prayer into public schools. Essentially, the GOP has not merely attempted to blur the lines as much as they have worked to abolish the already tenuous lines between religion and government.

Under its conception of being “pro-life,” the GOP wants Americans to own and use assault rifles and to carry concealed guns into bars, political rallies and college and university campuses. It long ago placed itself in the pocket of the National Rifle Association and firearms manufacturers. The NRA claims in its literature that “GUNS SAVE LIVES,” as it fights to dismantle governmental regulations tracking gun ownership and use.

Related: The NRA attacked Pulse survivors but they may not survive this scandal

In this regard, the GOP still claims a “pro-life” trademark when Republican leaders favor the death penalty more so than life imprisonment as punishment for certain crimes.

How “pro-life” is the GOP? Or more accurately, for whose lives does the GOP actually fight?

In the final analysis, the GOP’s “pro-life” rhetoric and its small and limited government philosophy stand in stark contradiction: Republicans want to get the government “off our backs” while imposing massive governmental restrictions at the expense of women’s reproductive freedoms.

So, for women and also for LGBTQ people, middle class, working class and poor people, people of color, non-documented residents and “dreamers,” people concerned with the health of our planet, people interested in living in a safer and less violent society and world, people who see healthcare as a right and not as a privilege for those who can afford it, how much real “freedom” and “liberty” do these people actually have in the Republican doublespeak of “pro-life”?