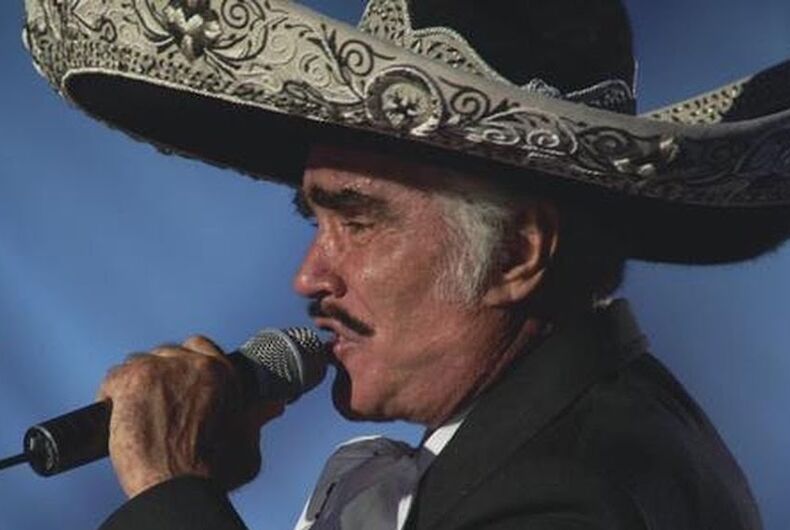 Vicente Fernández, a retired singer and actor known as “The King of Ranchera Music,” recently made headlines for sharing a story about his refusal to get a liver transplant. His reason: He was afraid of getting a liver from a gay donor.

Doctors reportedly found a lump in Fernández’s liver during his 2012 tour stop in Houston, Texas. Here’s how Fernández said he reacted when doctors suggested he get a transplant:

“They wanted to give me some other cabrón’s liver, and I told them ‘I’m not going to sleep next to my wife with another dude’s liver. I don’t even know if he was gay or a drug addict.’ They didn’t want to let me leave, but I got dressed and started leaving, They said, ‘Please Don Vicente, at least leave in the wheelchair. If anything happens to you, they’ll shut down the hospital,’ so I left in the wheelchair, and as soon as the truck arrived, I left.”

It’s notable that he conflates gayness and drug addiction as similarly “unhealthy” lifestyles that would affect his well-being, as if homosexuality were contagious.

Related: Mexico is considering a major change to its same-sex marriage laws

It’s still a bit disappointing though as Fernández’s work is widely renowned. He has won numerous Grammy and Latin Grammy Awards, a star on the Hollywood Walk of Fame and is one of the best-selling artists of all time in Mexico, selling over 50 million copies of his music worldwide. Although he retired from performing in 2016, he still records and publishes music.

Fernández ended up undergoing liver surgery in Chile to have the cancerous mass removed.

Perhaps his homophobia shouldn’t be surprising seeing as the 79-year-old singer was born in 1940, a time when homophobia wasn’t as actively discouraged. A 2013 Pew Research Center survey showed that 48 percent of Mexican natives over the age of 50 don’t believe society should accept homosexuality.

While the Mexican Supreme Court ruled that same-sex marriage bans are unconstitutional in 2015, such marriages are only in specific Mexican states.