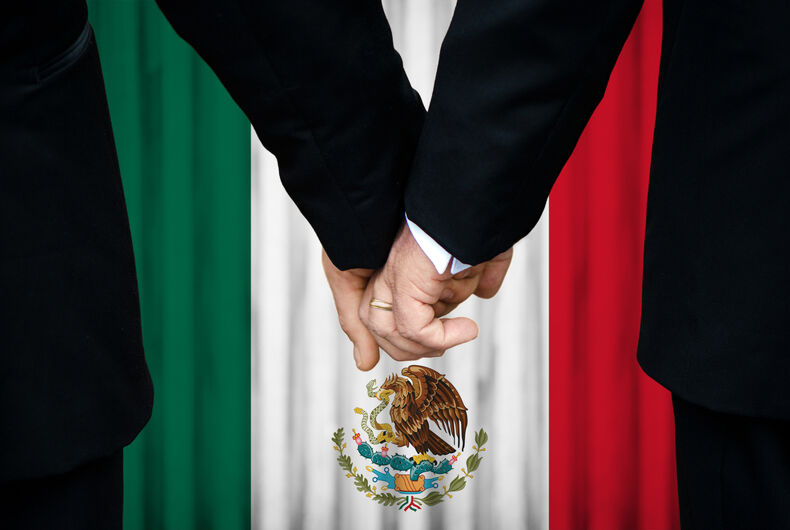 If a Mexican citizen living abroad wants to wed their same-sex partner, Mexican consulates can refuse them. But Mexican Senator José Alejandro Peña Villa has introduced a reform to their Foreign Service Law that would allow consular offices to authorize and issue marriage certificates to couples regardless of their gender.

In his presentation of the initiative on Tuesday, Villa said, “According to the Law of the Mexican Foreign Service and its Regulations, the consular authorities are authorized to act as judges of the Civil Registry and, therefore, have the power to take birth, marriage and death certificates, as well as to issue the certified copy correspondent.”

While the Mexican Supreme Court ruled that same-sex marriage bans are unconstitutional in 2015, marriages are only performed without restriction in Mexico City and in the states of Baja California, Campeche, Chiapas, Chihuahua, Coahuila, Colima, Jalisco, Michoacán, Morelos, Nayarit, Puebla and Quintana Roo. Same-sex marriage is also allowed in parts of Oaxaca and Querétaro.

Villa, who represents Morena, looks at this change as a Mexican human rights issue.

“In Morena, we are convinced and committed to the human rights agenda. We have a different direction and we have an inclusive policy,” said Villa.

Villa’s proposal has been presented to the Foreign Affairs and Second Legislative Studies commissions for additional study before it comes to a vote.

If passed,  thousands of Mexican citizens could marry their same-sex partners abroad, even if their home states don’t currently allow such unions.