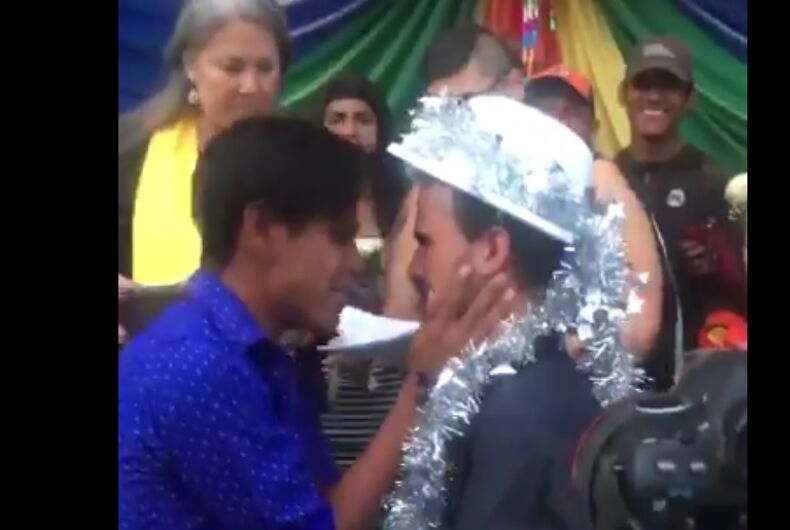 Two men were the first members of the migrant caravan from Central America to get married this past Saturday in Tijuana.

Erick Dubon, from Honduras, and Pedro Nehemias, from Guatemala, were married after almost three years together.

Congrats to Erick and Pedro! The first LGBT couple of 7 from the migrant caravan to get married today. pic.twitter.com/6t3Snt6jZV

Two other gay couples, three lesbian couples, two trans woman/cis man couples, and one straight couple from the caravan also got married on Saturday in Tijuana, INTO reports.

A group of around 80 LGBTQ people was in the first part of the caravan to arrive at the U.S.-Mexico border. Like many of the people in the caravan, Pedro and Eric intend to apply to the U.S. for asylum.

Pedro said that he was kicked out of his home when he was 15 and was the victim of child sex trafficking. Erick decided to leave Central America after a gang attacked him and smashed four teeth out of his mouth with a rock.

“We’ve made a new life for ourselves and I need him. I wake up and he’s there. I go to bed and I can say good night,” Pedro said. “He’s made life bearable and I really cannot imagine them sending one of us back or splitting us up.”

They said they hoped that being married would make it harder for them to be separated in the U.S. if they make it across the border.

In 2015, the Mexican Supreme Court ruled that state bans on marriage equality were unconstitutional in a nonbinding treating. Several states recognize marriages between two people of the same sex, including Baja California, where Tijuana is located.

Three officiants from the Unitarian Universalist Church in California presided over the marriages.

“This is an act of justice,” said officiant Hugo Cordoba. “The dream of marrying is an illusion for most of them. We are helping them make this a reality. They are fleeing persecution, violence, a number of really heavy things.”

“Queer migrants always get left aside, but they have a unique experience, and we want to honor that, even though many churches do not.”

A Republican put up a hateful anti-trans billboard. So neighbors fought back with love.