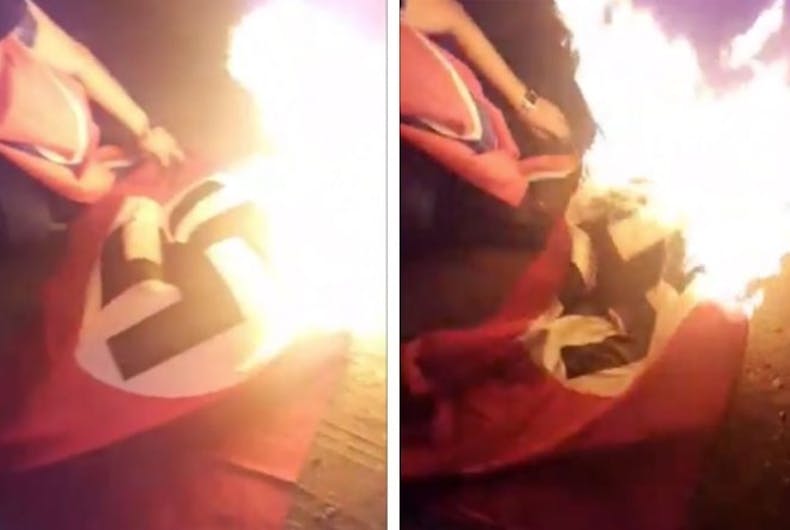 A man in Saskatchewan ripped down and burned a Nazi flag that a neighbor was flying.

Caleb Pelletier, a member of the George Gordon First Nation, posted a video of him burning a Nazi flag on Facebook. He also took down a Confederate flag and used it to cover his face.

The flag first appeared on May 9, when a 34-year-old man in Kelliher, Saskatchewan, put it up along with a Confederate flag.

A school is located about a block and a half from where the flags were flying and a First Nation is about 12 miles away, according to resident Jessica LaPlante.

Related: Watch this woman confront a man flying the Nazi flag outside his home

The police talked to the man, who was staying with his grandfather. While flying the flags isn’t illegal in Canada, they tried to talk him into taking them down.

“The home owner and the occupant were also told that it was not illegal to fly these flags and that the [Royal Canadian Mounted Police] was not acting in an enforcement roll, but rather as a voice for the community,” said a statement from the local government.

The mayor of Kelliher, Darcy King, tried to contact the man’s parents.

“It’s this no-brainer kid — 34-years-old and never grew up,” she told the Huffington Post Canada. “I contacted his parents… and they didn’t know it was happening. He’s living in his grandpa’s house and, as soon as it quits raining, he’s going to take it down.”

Several days later, the flags were still up, and Pelletier decided to take matters into his own hands because the “authorities weren’t going to.”

In a Facebook post that has since been removed, Pelletier wrote, “Considering the amount of First Nation kids that attended that school in that town, I did it for not only them but for us and First Nation people and our people before us man.”