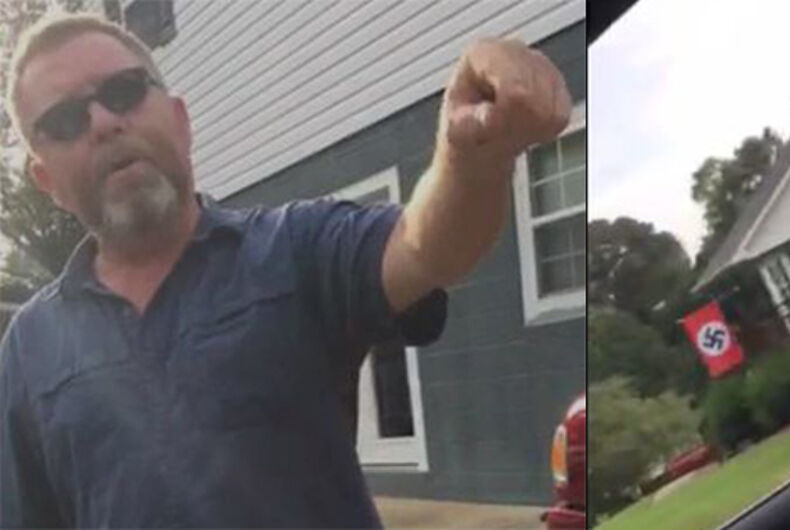 The meeting of white supremacists and neo-Nazis in Charlottesville, Virginia this weekend left three dead and many more injured. And while our president and so-called leader can’t be bothered to call out Nazi scum when he sees it parading down the streets of an American city, some everyday Americans are taking it into their own hands to confront racism.

A Twitter account, Yes, You’re Racist, has been leading a charge to out white supremacists who were part of the “Unite the Right” rally.

A North Carolina woman, Page Braswell, decided to make a similar move, but in real life, by pulling into the driveway of a house flying the swastika. As she approaches the house, in Mount Holly, to “see what they have to say about the Nazi flag,” the homeowner, ironically named Joe Love, steps out to confront her.

“This is America, not Nazi Germany,” Braswell tells Love.

“This is Nazi fucking America,” Love says, while simultaneously denying he is himself a Nazi.

Love also asks Braswell what flag she flies, to which she responds, “I fly a rainbow flag, thank you.”

“Okay, so what does that tell me about you?” he asks.

Love then tells her to leave, calling her queer and a lesbian, before insulting her weight, and using a series of derogatory names against her.

Love has since backpedaled, like so many of his racist counterparts in Virginia this weekend who are suddenly talking about togetherness now that their hateful views have been exposed to the world.

Love told the Gaston Gazette that “he doesn’t hate anybody,” and that he bought the flag several years ago and put it up after having several Confederate flags he was flying stolen from his house.

His spin doesn’t stop there.

“That used to be a religious symbol in India until Hitler got ahold of it,” Love said. “A lot of people don’t know that… I agree with the symbol as it started out as a religious symbol. But as far as backing Hitler and being a white supremacist and Hitler, I’m not into that.”

Right, because nothing says “I’m not into Nazis” like flying the Nazi flag.

And if you believe that, be probably has a story to sell you about how the civil war wasn’t about slavery.

The Gazette reports that when they spoke to him on Monday he took the flag down and walked back into his house with it, refusing to answer more questions.

He said he would replace it with the flag of another hateful, losing organization, yet another Confederate flag, if it will “make the world a better place.”

Maybe he should try the American flag? Or perhaps no flag at all?

Or maybe he can fly the rainbow flag. After all, the rainbow just used to be colors produced by the dispersion of light before we queers got hold of it.

Bullied to death: 8-year-old hangs himself after constant torment by classmates