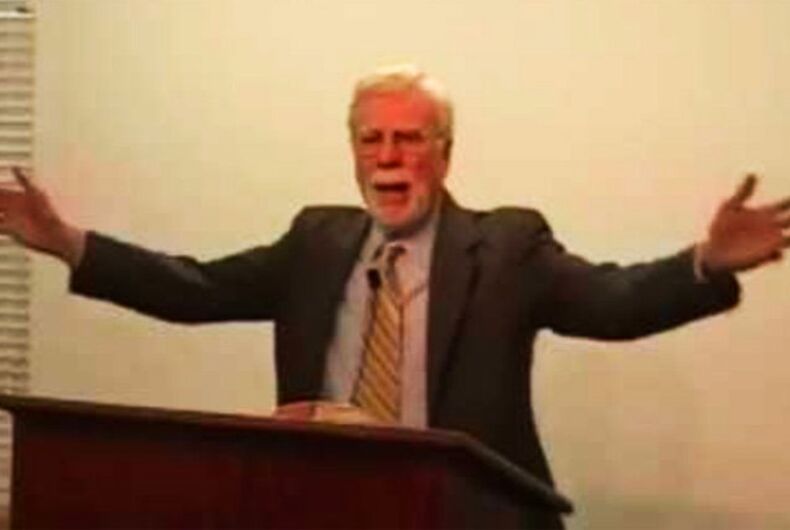 A former Indiana lawmaker said that he doesn’t believe that South Bend Mayor Pete Buttigieg would make a good president because gay men die young and Buttigieg will therefore die while in office. Obviously, the claim is untrue.

Don Boys, a former member of the Indiana House and an evangelist who wrote a book entitled Muslim Invasion: The Fuse is Burning!, wrote a blog post entitled “Pete, Since You Brought it Up, How ‘Gay’ Are You?”

Such a defensive title suggests that the op-ed will not be a nuanced discussion of sexual identity in politics.

Boy opens with the usual homophobic statements: he says that Mayor Pete isn’t really married because Chasten is a man; he accuses “leftist media” of promoting Buttigieg’s campaign because it’s “anti-biblical, anti-common sense, and anti-decency”; and he prefaces the meat of his post by saying, “I don’t hate Pete or his lover or any other homosexual, but….”

“Since studies show that about half of homosexuals were seduced into perversion by age 14, I wonder if Pete would totally renounce and repudiate such a revolting practice,” writes Boys, not linking any source of the “practice” of pedophilia among gay men.

“Just a simple disavowal with appropriate disgust thrown in will suffice.”

Then he says that Buttigieg, 37, who has decent health care and no particular reason to believe that death is just around the corner, is probably going to drop dead soon because that’s what gays do.

“All homosexuals are aware that their lifespan is about 20 years less than for normal people,” Boys wrote, “so voters should know that a homosexual president may not live to finish his term.”

Boys doesn’t cite a study that actually shows that that’s true, either that gay men live 20 years less than straight people do or that “all homosexuals” know this is true.

And, even if that were true, it wouldn’t matter in Buttigieg’s case. The male life expectancy in the U.S. is 79, and Buttigieg is 37. If he gets into office at age 39 and serves eight years, he should be fine.

“70% of homosexuals admit to having at least one STD, plus they are infected with other contagious diseases such as tuberculosis, pneumonia, etc,” Boys wrote.

The American Sexual Health Association says that one in two sexually active adults – queer and straight – will have an STI by the time they are 25 years old, and presumably that number gets higher as people get older and have more experiences.

“About 20% of homosexual men are infected with HIV and about half of them do not know it,” Boys wrote, not citing a source for the statistic or noting that people living with HIV can live full and healthy lives.

Now, if Boys stopped there, that would be a pretty homophobic column. But he is really obsessed with gay sex, so of course he went on in excruciating detail.

About 23% of “gays” (according to the largest study ever conducted) participate in golden showers where they urinate on each other, splash each other with urine or drink urine. Now, it is a person’s own business if he has a taste for urine, but we have a right to know what Pete thinks about that. Is he “that gay”?

Boys will most likely not ask any of the straight candidates to denounce any specific sexual practice, even though it’s possible that the current president is a fan of golden showers.

While Boys is clearly extreme, his views were formed in the context of a homophobic culture that constantly expresses disgust at homosexuality. Other people may have less extreme views – or at least they’re not willing to express them as openly – but they’re still damaging to LGBTQ people’s lives.

Under Armour’s pride collection of sneakers & shirts is small, but it stands out