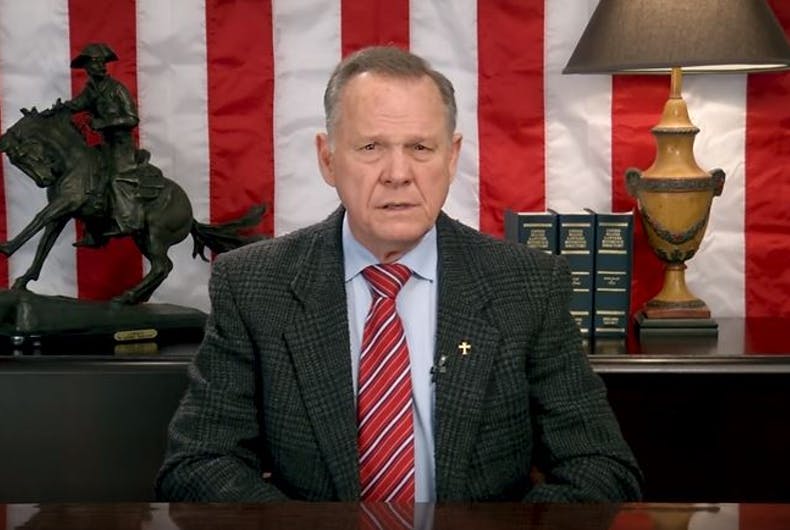 Alabama’s disgraced judge, Roy Moore, is pondering a second run for the Senate, in spite of opposition from the GOP who seem intent on blocking him.

Moore, who was accused of the sexual harassment of multiple teenaged women, ran for the senate in 2017 during a special election. Moore was the first Republican to lose a senate race in the state in approximately 25 years.

The GOP sees a second Moore run as a move that would endanger their chances of defeating Democrat Doug Jones. Jones beat Moore in the 2017 special election.

Moore has said he is still weighing his options, and will announce if he’ll run in mid-June.

“I’m still praying about it and talking to people, my family, my wife and I’m strongly considering it,” said Moore to The Associated Press.

The Republicans, who control the senate by a 53-47 majority, consider the defeat of Jones a high priority. Taking back Alabama is key to the GOP retaining control of the senate in 2020 when several of their seats are at state, and growing frustration with the current senate could threaten their majority status.

Moore’s 2017 run divided the GOP as the sexual harassment allegations arose before the election. Even with President Trump’s endorsement, Moore was not able to spring back.

Virulent anti-LGBT, Moore even refused to concede by claiming sodomy, abortion, and transgender people have held him back.

The GOP would rather see a candidate with less controversy surrounding him.

“The people of Alabama rejected Roy Moore not too long ago,” said Senator Todd Young (R-ID) to the Associated Press. “I with my Republican colleagues always want to be supportive of the most conservative candidate who can actually win a race, and I don’t see that anything has changed in the state of Alabama since the last election.”

Young, who leads the National Republican Senatorial Committee and is tasked with electing more Republicans to the chamber, added, “We’ll actively work to make sure that the most conservative, electable Republican is our nominee.”

Indiana Republican asks Buttigieg ‘how gay are you?’ in shockingly vulgar diatribe about sex