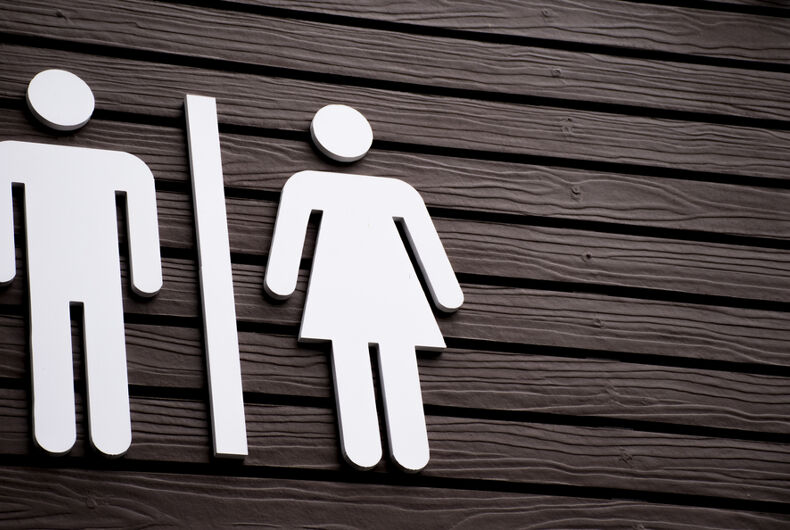 A controversial “indecent exposure” bill passed the Tennessee House this week after lawmakers removed elements targeting transgender people. However, LGBTQ advocates in the state say the trans community isn’t out of the woods just yet.

On Monday, the Tennessee House voted 69-25 in favor of House Bill 1151, a measure opponents claim is a thinly veiled anti-trans bathroom bill. Sponsored by State House Rep. John Ragan (R-Oak Ridge), it would redefine the list of “public places” where indecent exposure can occur to include restrooms, locker rooms, and other facilities designed “for single-sex, multi-person use.”

The original version of the bill appeared to single out transgender people by claiming “gender dysphoria” and “gender confusion” couldn’t be used as a “defense to the offense of indecent exposure.”

Because HB 1151 uses the low bar of an “ordinary person standard” to define what constitutes a credible fear of harm, that language could have had a devastating impact on trans lives in Tennessee. Someone could have a transgender person arrested for indecent exposure simply because they feel uncomfortable sharing a bathroom with them or changing next to them.

Individuals arrested under such a law could face anything from a Class B misdemeanor to between one and six years behind bars if the offended party is under 13 years old.

But according to Tennessee Equality Project Executive Director Chris Sanders, the “portions directly targeting the transgender community” were removed from HB 1151 before the House voted in favor of it on Monday. Amendments to the legislation cut the provisions regarding “gender dysphoria” and “gender confusion.”

Other changes made to HB 1151 further enumerate the list of places where acts of indecent exposure can take place. Should the Tennessee Senate approve the bill and Republican Gov. Bill Lee sign it into law, these sites would henceforth include “highways, transportation facilities, schools, places of amusement, parks, places of business, playgrounds and hallways, [and] lobbies.”

However, the bill text notes that indecent exposure is “not limited to” these locations.

Even as the removal of certain anti-trans elements is a cause for celebration, Sanders claims these amendments remain a “concern” for LGBTQ advocates in Tennessee.

“Given the long history of harassment of transgender people in bathrooms, the enumeration is concerning,” he tells LGBTQ Nation in an email, citing fears that “those places will be more heavily policed by members of the public and by law enforcement.”

Sanders adds that passage of even a watered-down version of HB 1151 “might embolden anti-transgender actions.”

As HB 1151 now heads to the upper house of the legislation for consideration, it made national headlines this week when singer Taylor Swift donated $113,000 to the Tennessee Equality Project to fight a cadre of bills termed the “Slate of Hate.” HB 1151, which was accompanied by a companion bill in the Senate, is one of six pairs of legislation targeting the LGBTQ community in 2019.

Other proposals would encourage the state to defend school districts that engage in anti-trans discrimination and allow adoption and foster care agencies to turn away same-sex couples on the basis of “sincerely held religious beliefs.”

But in the face of countrywide scrutiny, Ragan has continued to defend HB 1151. As the Associated Press reports, the conservative lawmaker “said he carried the bill due to confusion created when Obama-era regulations instructed schools to allow students to use bathrooms and locker rooms of their expressed gender identity instead of their sex assigned at birth.”

Ragan maintains “his bill provides clarity” on the issue, according to the AP.

Other defenders of the legislation say HB 1151 is not about transgender people at all. Rep. William Lamberth (R-Portland), who serves as House Majority Leader, says the legislation “bans public acts of sex in our bathrooms.”

“If you’re not for that, what are you down here for?” he asked colleagues during debate.