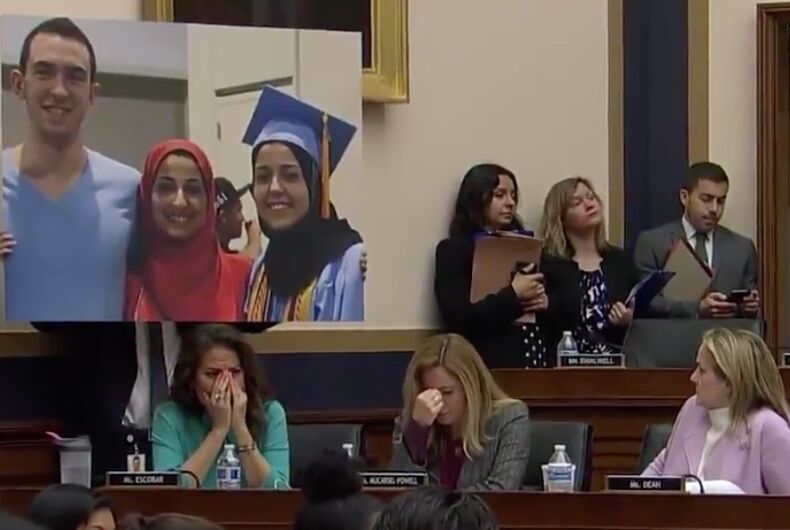 Members of the House Judiciary Committee break down in tears during Dr. Mohammad Abu-Salha's testimony about the murder of his familyPhoto: Screenshot

Dr. Mohammad Abu-Salha described the execution-style shootings of his two daughters and son-in-law during testimony that brought members of the House Judiciary Committee to tears. The committee is investigating the sharp rise in hate crimes over the past decade.

“(The) officer whispered: ‘They didn’t suffer, it was swift, one shot to the back of the head.’ His statement did not make it more bearable; nothing did,” Abu-Salha told the committee.

Congressmembers could be seen clasping their hands to their mouths as Abu-Salha described reading the autopsy reports for his children.

“I must be one of a few physicians, if not the only one, who read his own children’s murder autopsy reports and details. They are seared into my memory,” Abu-Salha testified.

“Bullets macerated Yusor’s and Razan’s brains. Deah took many bullets to his arms and chest before he fell down to the ground. After that, the murderer saw that he was still breathing and shot him again in the mouth.”

As committee members gasped and wiped away tears, Abu-Salha drove his point home in a clinical and controlled tone.

“The last time we saw them in their coffins, Yusor’s forehead was bulging and her hazel eyes had turned grey and lifeless. What was once Razan’s warm and smiling face filled with life was now a lifeless stone cold and deadly pale,” he said.

“We miss our children so much. At times the pain is just as sharp now as when they died. I ask you, I truly plead to you, not to let another American family go through this because our government would not act to protect all Americans,” Abu-Salha said.

“Please remember them, Yusor, Deah and Razan. They are my children and they are gone.”

Dr. Mohammad Abu-Salha: "In a desperate attempt to make it bearable, an officer whispered: 'They didn't suffer. It was swift. It was one shot to the back of the head.' Well, his statement didn't make it any more bearable. Nothing did." pic.twitter.com/fTnGyLs7bM

Why Pete Buttigieg is good for gays