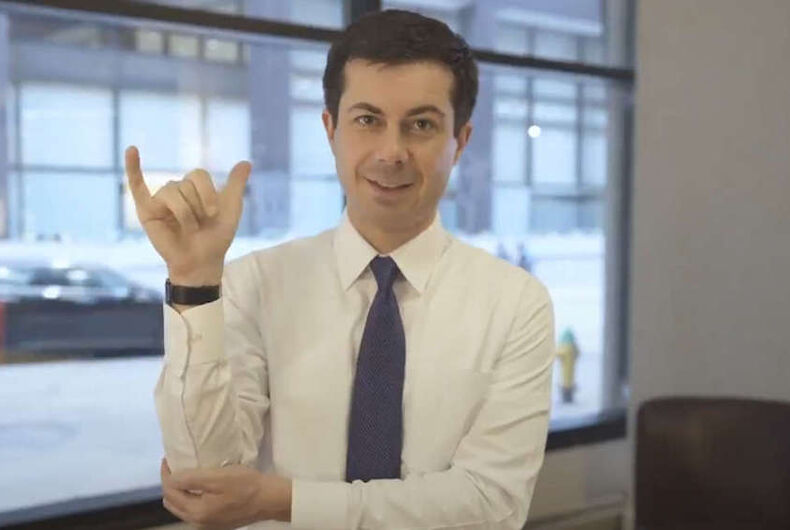 Even before officially announcing his campaign for presidency, Pete Buttigieg impressed supporters with his intelligence and unflappable, plain-spoken responses to homophobia. And now, two recent actions may endear his supporters to him even more.

First, Buttigieg recorded a video thanking one of his deaf supporters in sign language (below), and the video has since gone viral.

The sign made the letter P on the left side of his chest and the letter B on the right, bridging the two letters in the spirit of Buttigieg’s campaign. Buttigieg has used the bridge as a central campaign metaphor representing his desire to “serve as a connecting force between America’s past and future; the center of the country and the coasts; and conservatives and progressives.”

After seeing Pleasants’ sign for his name, Buttigieg created a brief response video in which he said via ASL, “Hi Andy — appreciate your support, thank you!”

Buttigieg may well be the first ever presidential candidate ever to directly acknowledge a deaf supporter via ASL.

When Pleasants saw Buttigieg’s response video, he teared up. “It means so much to see a major presidential candidate actively reach across the communication divide to include those like me, especially in a society where the burden of that divide so often rests on the Deaf individual,” Pleasants wrote on Twitter.

“Keep signing the sign & walking the walk!” Pleasants wrote back to Buttigieg.

In late March, Pleasants posted a video expressing his desire to join Buttigieg’s campaign to ensure that people with disabilities are represented.

In other recent news, Buttigieg announced on Friday that he “will no longer accept contributions from federal lobbyists, and plans to return $30,250 to those who have already donated.” Previous to then, Buttigieg had been criticized for being the “only high-profile Democratic candidate to actively accept money from powerful Washington lobbyists,” according to Axios.com.

Is America ready for a trans woman of color running for president?