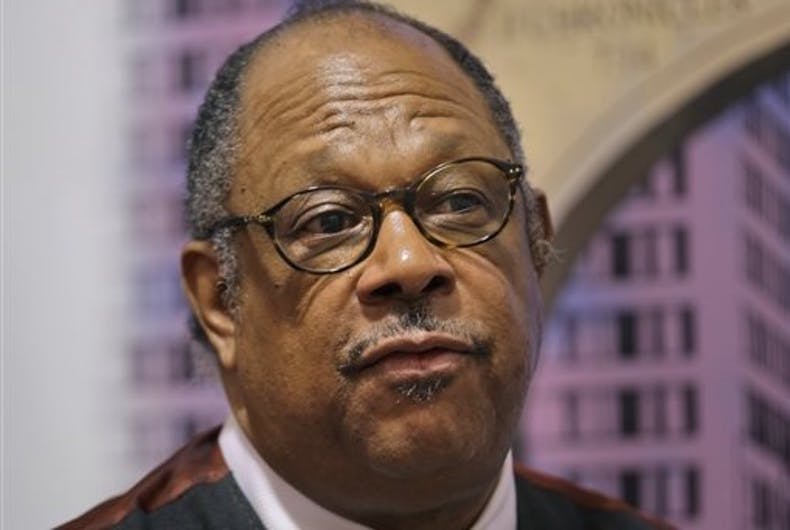 A Christian school in Harlem has been feeding students rabid homophobia for years.

The Atlah World Missionary Church is run by Pastor James Manning, who is best known for some of his appearances on The Daily Show where he claimed that Barack Obama was “Hitler” and that Starbucks puts “gay semen” in its lattes.

The church is listed as an anti-LGBTQ hate group by the Southern Poverty Law Center.

It also runs two schools: Great Tomorrow’s USA Elementary/Middle and Atlah High School. Manning is the superintendent of those schools.

A long investigative piece published by the Huffington Post looked into allegations of sexual and physical abuse against the children at the schools, and the power Manning has over their parents in what some of the church’s former members call a “cult.”

One student, Sharif Hassan, was told to change his name to “Michael” because his name sounded “too Muslim.” He was locked in a basement for three days with rats and bugs because he had a relationship with a girl in the school. He wasn’t allowed to eat for most of each day he was locked in the basement, and his parents supported the punishment as “biblical.”

In addition to excessive punishment of children, the school taught homophobia. The church is famous for its signs like “Jesus would stone homos,” and the school goes deeper into that homophobia.

Some of the former students who talked to the Huffington Post said that Manning would regularly use the word “faggot” and teachers said that gay people were “demons who were doomed to go to hell.”

The school’s website used to tell parents, “Stop the homosexual brainwashing of your children!”

Students said that they were forced to watch Manning’s YouTube videos, many of which have been removed from the site because they don’t meet community standards. One of the videos that is still available is entitled “Jussie Smollett And Barack Hussein Obama Are Lovers.”

Another student said that they were told to defecate in bags and leave them in front of gay-owned businesses.

Manning would also accuse students of being gay to get their parents to punish them.

One former student said that Manning sexually harassed her just after she graduated, and the harassment was serious enough that she even recorded Manning making sexual comments to her.

While she was 18 at the time so prosecutors couldn’t press charges, the recording divided the church community as Manning accused her of doctoring the tape.

Manning kicked several of the students who challenged him about the tape, including Joshua Farr, 18. He told Farr’s parents that Farr was gay, which wasn’t true but was enough for him to get kicked out of their home. He moved into his grandmother’s apartment, where his younger brother came after he got kicked out of his home a year later.

The school registered with the New York Department of Education in 2013, although their registration is pending. According to the Huffington Post, the state is backlogged due to staff cuts, and it hasn’t been able to evaluate Atlah High School’s program.

But, in the meantime, private schools in the state can grant standard high school diplomas even though there is nothing in place that evaluates what students are learning at the school.

In 2016, Manning almost lost his church due to unpaid taxes and bills totaling over $1 million. The Ali Forney Center – an organization that provides shelter and other resources for LGBTQ youth – bought the building.

Manning wasn’t pleased, and he posted a video on YouTube where he said, “They’re going to turn this church into a bathhouse, they’re going to turn this church into a homeless building for the sodomites. The sodomites are sick as hell! This is the lord’s house! This ain’t no damn bathhouse! It ain’t no fag house! And before you can ever own this property, hook or crook, men who are fags with testicles will be carrying babies in their testicles and giving birth to them through their anus.”

At the last minute, a judge vacated the foreclosure and sent Manning’s case back to the courts, something that the church celebrated by burning “the rainbow fag flag.” Manning argues that his church should be tax-exempt and not have to pay utility bills.

Even though there has been a police investigation into the church and Manning has divided families, he maintains power over congregants’ lives.

“He has power over all those members in church, whether financially, mentally,” Hassan, the student who was locked in the basement for three days, said. “How is that anything but a cult?”