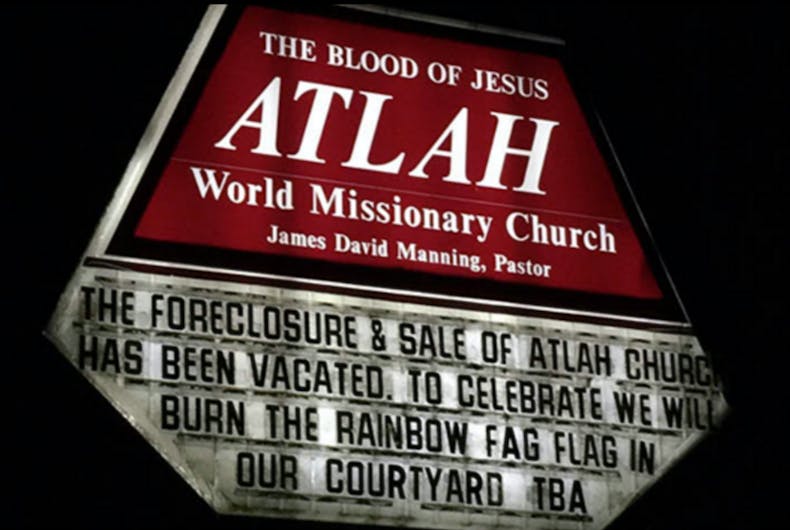 The notoriously anti-gay Atlah Worldwide Missionary Church in Harlem says it will burn the rainbow flag to celebrate a court ruling that will allow the church to again avoid foreclosure.

The foreclosure & Sale of AtlahChurch has been vacated. To celebrate we will burn the Rainbow Fag Flag in our courtyard date to be announce

“We gonna get a whole bunch of them rainbow flags, we’re going out there in our courtyard and we’re gonna stick a match to them and we’re gonna burn them,” Manning says, driving the point home in a video called “The Manning Report” while asking for money.

A Manhattan Supreme Court Judge put the foreclosure and sale of the property on hold last week, DNA Info reports, awaiting a ruling on the church’s tax-exempt status. The church owes more than $1 million to creditors, which it says it should not have to pay.

In the meantime, nonprofit groups including the Ali Forney Center have raised hundreds of thousands of dollars to buy the property in the event the foreclosure goes through and turn it into a shelter for homeless youth.

The Center responded to the Church’s message with a statement.

“Reverend [James David] Manning’s threat to burn the rainbow flag in the courtyard of his church is reprehensible, especially in the aftermath of the Orlando Massacre. We plan to surround his church with rainbow flags, the symbol of our pride as a community, to show that our pride cannot be destroyed, symbolically or otherwise,”AFC Executive Director Carl Siciliano said. “The best response to his hate is a display of community love and pride by the LGBT community and our allies. All he has won for now is the opportunity to incur many further legal costs as he tries to escape the consequences of decades of failure to pay Atlah’s water bills.”