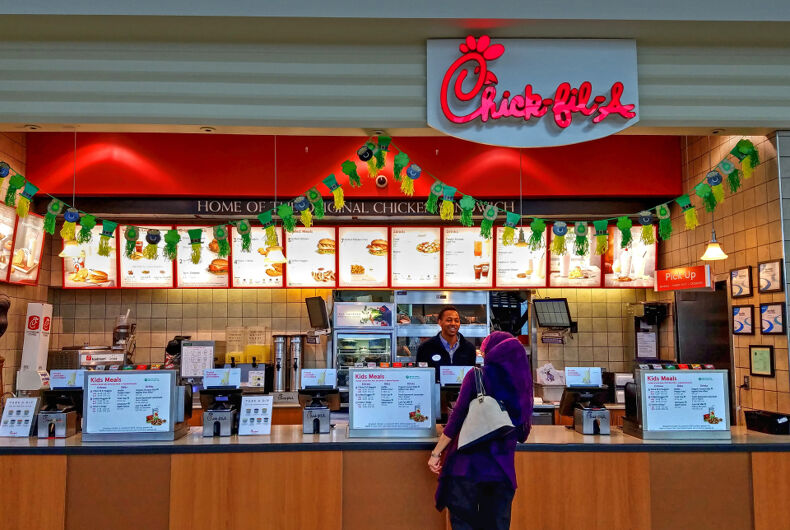 A New York airport has killed plans to open Chick-fil-A franchises following revelations that the fast food chain has continued to donate millions of dollars to anti-LGBTQ groups. The company was also banned from the San Antonio airport last week.

Less than 24 hours after the Niagara Frontier Transportation Authority (NFTA) announced plans for Delaware North Cos. to open a location at the Buffalo Niagara International Airport, they walked back the announcement, saying the company would find a different vendor.

Democratic Assemblyman Sean M. Ryan, a champion of the NFTA in the state legislature, protested the decision after it was announced.

“A publicly financed facility like the Buffalo Niagara International Airport is not the appropriate venue for a Chick-fil-A restaurant,” Ryan said after the decision was reversed.

“We hope in the future the NFTA will make every effort to contract with businesses that adhere to anti-discriminatory policies, and we’re confident another vendor who better represents the values of the Western New York community will replace Chick-fil-A as a part of this project in the very near future.”

The San Antonio city council voted against allowing Chick-fil-A to open a franchise in the local airport after it was revealed that the company has continued to pour millions of dollars into anti-LGBTQ groups.

Treviño made the motion to deny the fast food chicken sandwich outlet the lucrative spot as an airport concession.

In an emailed statement, the chicken chain again said it doesn’t discriminate against its employees or customers, but avoided the millions of dollars given to anti-LGBTQ groups that use the money to actively discriminate against LGBTQ people and encourage other people to do so as well.

“We do not have a political or social agenda or discriminate against any group,” the statement said. “More than 145,000 people from different backgrounds and beliefs represent the Chick-fil-A brand. We embrace all people, regardless of religion, race, gender, ethnicity, sexual orientation or gender identity.“

But that hasn’t stopped them from donating to anti-LGBTQ organizations. The company’s charity gave $1.8 million in donations to anti-LGBTQ groups in 2017 alone.

Editor’s Note: This story has been corrected to remove a reference to the “Cheektowaga airport” as a separate entity. The Buffalo International Airport is in Cheektowaga; they are the same airport.