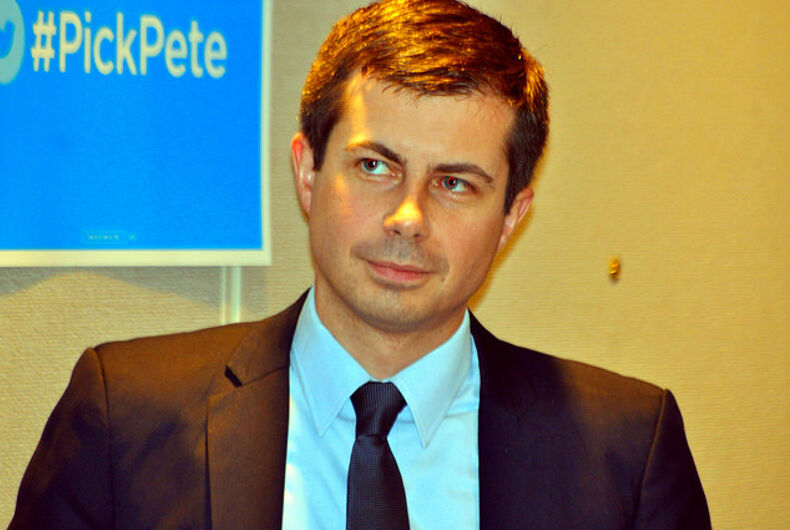 The media’s fascination with Pete Buttigieg meant that at some point the mayor of South Bend, Indiana, was bound to get the kind of questions that begin, “As a gay man, what do you think about X?” Some of these questions are silly — really, James Buchanan? — and some more interesting.

Last week, Buttigieg was asked about Chik-fil-A, the fast food chain which has a track record of contributing to groups opposing LGBTQ rights. There are also the comments of Chick-fil-A president Dan Cathy, who created a public relations disaster in 2012 by slamming marriage equality for violating “biblical principles.”

Buttigieg responded with the kind of comment that makes the press like him: “I do not approve of their politics, but I kind of approve of their chicken.” He then went on to speculate about how he might broker a “peace deal” between Chick-fil-A and the LGBTQ community.

As is often the case with Buttigieg, he uses the immediate issue at hand to talk about a larger issue. Lost in the media coverage of Buttigieg’s response was the broader point that he was trying to make, about the endless outrage loop that fuels political discussion.

“If you’re turned off, as I am, by the political behavior of Chick-fil-A or their executives — if that leaves a bad taste in your mouth, so to speak, and you decide not to shop there, I’d certainly get it and I’d support that,” Buttigieg said. “But the reality is, we, I think, sometimes slip into a sort of virtue signaling in some cases where we’re not really being consistent. I mean, what about all the other places we get our chicken from?”

“I just want to make sure that we’re not too sanctimonious about this, because sometimes we put ourselves in this position of judgment that doesn’t really hold up under scrutiny,” Buttigieg continued. “My belief is that we should primarily deal with political issues in the political arena.”

That’s a much larger (and more subtle) thought than the “Let’s make a peace deal’ coverage would suggest. In essence, Buttigieg is calling on Americans on both sides to ratchet down the sanctimony behind the culture wars.

It’s a noble argument. Buttigieg is well positioned to talk about it, because he knows just how harmful the impact of the right’s virtue signaling can be. He’s not suggesting that people change their beliefs — he explicitly says he’s okay with someone boycotting Chick-fil-A. Just don’t convince yourself that expressing your beliefs makes you superior to everyone else.

Humility isn’t exactly the coin of the social media realm, so Buttigieg’s comments aren’t likely to lead to a sudden change in behavior. Virtue signaling may be so engrained in the culture that it can’t be eliminated.

Buttigieg’s remarks sound a lot like the kind Barack Obama would deliver. As president, Obama was eloquent about the need for Americans to recognize what binds them together.

Unfortunately, that message went nowhere in large part because the right wing saw Obama as a divisive figure no matter what he said. Not to excuse Democrats, who are prone to sanctimony as well, but Republicans have their own television channel, Fox News, whose business model is predicated on generating outrage.  How can you engage in a good-faith conversation under those terms?

Those are questions that Buttigieg wasn’t asked. Instead, he diagnosed the larger issue. What would be interesting to hear is what he sees is the cure given today’s political reality.

This dating app for queer women just exposed the data of its 5.3 million users