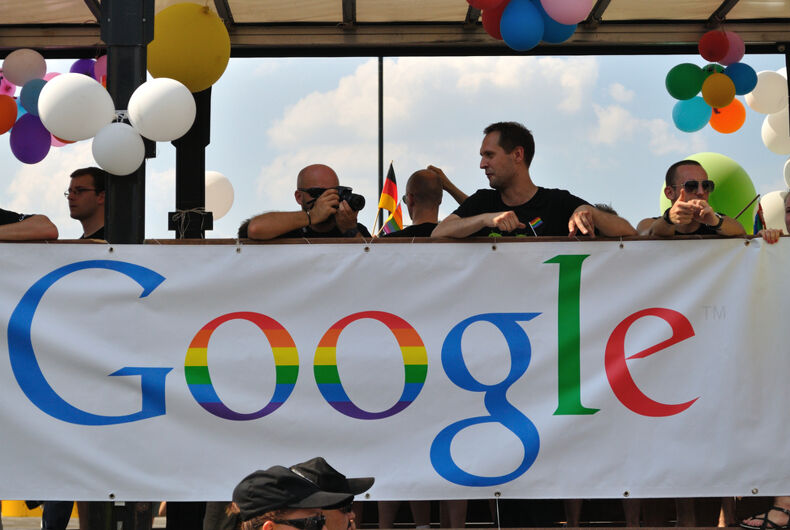 Participants in the EuroPride Parade on July 17, 2010 in Warsaw, PolandPhoto: Shutterstock

Google’s perfect score on the Human Rights Campaign’s Corporate Equality Index has been suspended over the company’s refusal to remove an “ex-gay” conversion therapy app aimed at minors. The fake therapy is a leading cause of suicide among LGBTQ youth.

It is only the third time a company’s score has been suspended in the almost 20 years the group has issued an annual report on corporate America’s support for the LGBTQ community.

“We have been urging Google to remove this app because it is life-threatening to LGBTQ youth and also clearly violates the company’s own standards,” the organization said in a statement.

Related: Why is Google cozying up to anti-LGBTQ activists? They won’t say.

“Google needs to stop digging a hole with the LGBTQ community before it’s too late,” Truth Wins Out’s Executive Director Wayne Besen wrote in an op-ed published yesterday on LGBTQ Nation. The group was the first to flag the app on Amazon, Google, and Apple’s store.

After being contacted by the organization, Apple and Amazon quickly removed the app. Google has refused to even speak with LGBTQ activists or answer any questions about why they continue to host an app that tells youth they can be “saved” by changing their sexual orientation or gender identity.

“The company, whose motto was once ‘Don’t be Evil’, has recklessly chosen to let its reputation die on the hill of an evil ‘ex-gay’ app,” Besen added. “For all the smart people who work at Google, it’s amazing that no one at this company has thought this through.”

“All this unnecessary drama to what ends? So, Google can cozy up to right wing extremists by protecting the lofty principle of allowing LGBT children to be psychologically tortured by abusive quacks? This is one of the worst public relations debacles I’ve seen in 30 years. Google should be ashamed of itself and immediately reverse course.”

Earlier this week, Google named Kay Cole James to its new Advanced Technology External Advisory Council, to give advice on the ethics of Artificial Intelligence. James was formerly a vice president of the Family Research Council, a group labeled as an anti-LGBTQ hate group. She is currently the President of the far right wing Heritage Foundation.

Google has also refused to address criticism about James’ appointment as an advisor.

570 companies nationwide were given a perfect score by HRC in this year’s report.

The CEI itself has been criticized by other organizations and activists for overlooking other problematic issues with companies to focus solely on their stance on LGBTQ issues. For example, Walmart repeatedly scored high on the index for having policies to protect LGBTQ people despite simultaneously fighting multiple lawsuits alleging discrimination against LGBTQ employees.

The retail giant’s rating was also suspended after the U.S. Equal Employment Opportunity Commission found probable cause for anti-trans discrimination within the company in 2017. It received a perfect score again in the 2018 and 2019 reports.