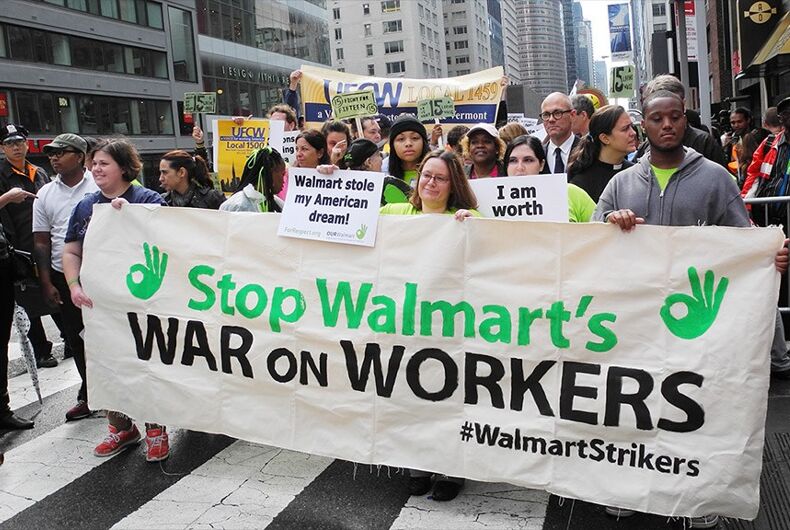 In December of 2016, Walmart settled a class action lawsuit brought by current and former gay and lesbian employees who were denied benefits like insurance for their legal spouses for $7.5 million.

Last month the retail giant lost a federal Equal Employment Opportunity Commission (EEOC) case when the board ruled that they had discriminated and harassed a transgender woman at a Sam’s Club subsidiary in Florida.

Today, another transgender woman has won her case before the EEOC. Charlene Bost also alleged she was harassed by coworkers at a Sam’s Club in North Carolina, treated differently, unfairly disciplined, and ultimately fired after she came out as trans. Both EEOC cases were handled by the Transgender Legal Defense and Education Fund.

“Sam’s Club wasn’t safe for me as a transgender woman,” Bost said. “No one should be treated the way I was while just trying to do my job. I care about doing good work, but my efforts were met with bias, hostility and retaliation from coworkers and supervisors who targeted me for being transgender.”

“Walmart maintains a strong anti-discrimination policy. We support diversity and inclusion in our workforce and do not tolerate discrimination or retaliation of any kind,” Walmart spokesperson Randy Hargrove told LGBTQ Nation in an emailed statement. “While we disagree with the EEOC’s findings, we are open to discussions with Ms. Bost regarding a conciliatory resolution.”

Despite the regular bombardment of discrimination stories and generally poor treatment of workers, Walmart continues to score highly on the Human Rights Campaign’s Corporate Equality Index. Pride At Work, the nonprofit that represents LGBTQ working people, has criticized HRC for the way it scores the CEI for years.

“We are disappointed that the HRC Corporate Equality Index rewards big corporations for questionable employment practices without taking into consideration the lived experiences of the LGBTQ working people in those corporations,” Pride At Work Executive Director Jerame Davis said.

“Companies continue to receive high scores on the HRC CEI despite their treatment of workers overall and, in the specific case of Walmart, the treatment of LGBTQ workers. Despite multiple LGBTQ discrimination lawsuits against the company, many other documented incidents of anti-LGBTQ bias, and our own call for the company’s score to be suspended, Walmart’s rating remains inconceivably high.”

The corporation is a “diamond sponsor” for HRC’s upcoming National Dinner high dollar fundraiser. Companies at that level give the organization at least $35,000 annually.

The question remains, however, whether or not HRC will continue to ignore the plight of actual LGBT employees in favor of corporate donations. So far they have given no indication that the multiple lawsuits and discrimination claims justify the inflated score.