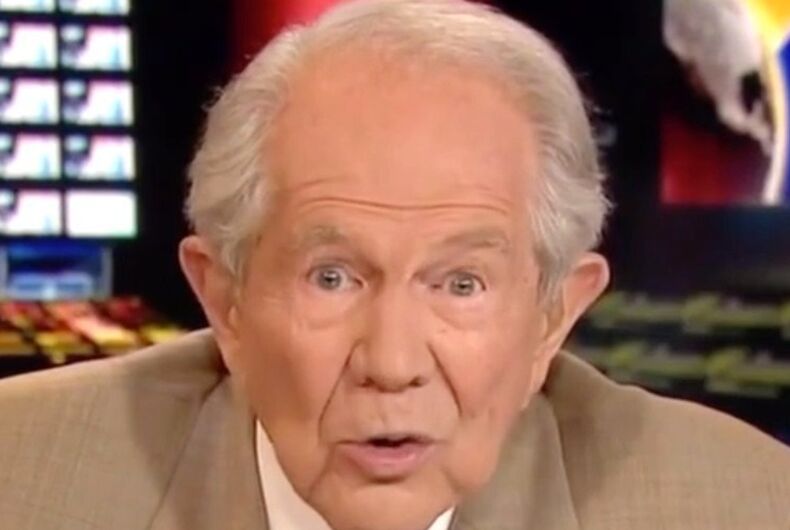 Televangelist, former Republican presidential candidate, blood diamond mine owner, and all-around-nutjob Pat Robertson is outraged by the idea that Jesus may have been a gay man. The 88-year-old man who has claimed he can leg press 2,000 pounds says Satan is behind the “rumor.”

His perspective on reality may be a bit skewed.

Theological theories that the Christian savior was homosexual have been rampant for decades. After all, he never married, hung out with a dozen guys, and John the Apostle is repeatedly referred to as “the disciple whom Jesus loved.”

But Robertson says the “rumors” are a “lie from the Devil.”

Related: Pat Robertson says Christians should let gays and Muslims kill each other

“You know, I hate to say it, but the homosexual agenda has gotten so pervasive, it is taking the thought processes of colleges, universities, all the way up and down the line, the bathrooms, and all the transgender, and so forth,” Robertson tells a viewer who wrote in to inquire about the theological musings.

“And I just think it is a lie from the devil. Jesus Christ, you know, was the perfect man. He never sinned in the whole time that He lived. And He obviously wasn’t engaged with any relationship with any fellow man. And there’s no support for that in the Bible whatsoever. Nothing in history. Nothing whatsoever. But it is a fiction that is created by the tiny minority who are in that L.. G…B… all those numbers.”

After his co-host gently corrected him that the terminology is LGBTQ, Robertson excitedly confirms that she is correct and that only makes it even more shocking!

“Thank you!” exclaimed. “The Q for ‘queer’ at the end! Okay! But that’s what it is. There’s no foundation whatsoever.”

Two people were stabbed in the middle of Ft. Lauderdale Pride

Did this popular LGBTQ activist burn down his own house in a fake hate crime?