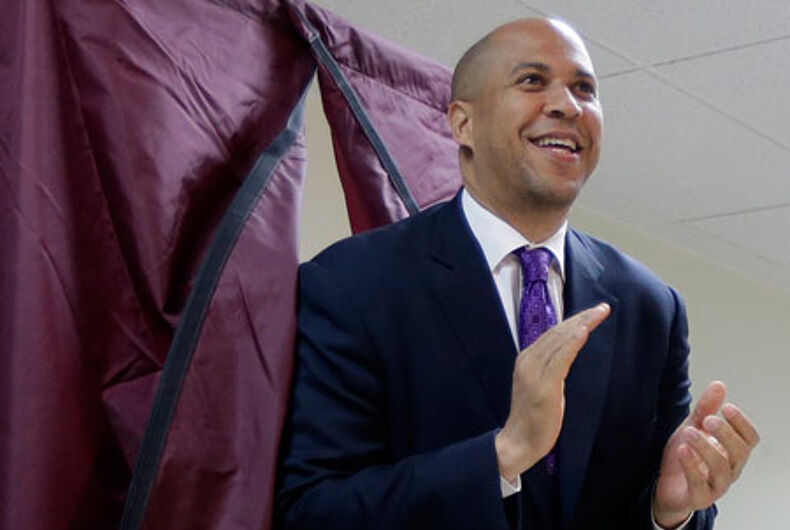 Senator Cory Booker from New Jersey announced that he is entering the Democratic presidential primary today.

Booker released a video announcing his campaign. The video discusses how his family faced redlining when he was young and his ties to his community today.

Booker, who is the first black senator from New Jersey, is the son of two IBM executives. He went to Stanford University and Yale Law School and was a Rhodes Scholar. As an adult, he moved to Newark, New Jersey, where he went on to become mayor before being elected to the U.S. Senate in a special election in 2013.

He has a long history of supporting LGBTQ equality. When he was mayor, he criticized Governor Chris Christie’s opposition to a bill that would have legalized marriage equality in the state.

When marriage equality was legalized in New Jersey, Booker himself officiated weddings for same-sex couples.

Booker has earned a 100 on HRC’s Congressional Scorecard in every session of Congress since he was first elected to the Senate and was one of the co-sponsors of ENDA in 2013.

He also made a name for himself for his opposition to the Trump administration. He was one of five senators who got labeled the “Hell-No Caucus” by Politico because of their opposition to Donald Trump’s nominees in the months that followed his inauguration in 2017.

(The others were Kirsten Gillibrand, Elizabeth Warren, Bernie Sanders, and Kamala Harris, a list that makes a lot of sense today.)

Booker made national headlines for questioning nominees about their stances on LGBTQ issues. He grilled Secretary of State nominee Mike Pompeo for his comments that being gay is a “perversion” in Senate hearings last year, so much so that the Christian conservative organization Liberty Counsel called on him to resign for supposedly hating Christians.

For years, there have been rumors that Booker is himself gay. The 50-year-old has never married and doesn’t like to discuss his private life.

Political opponents have brought up his sexuality before, and he often refuses to respond, saying that he wants “to challenge people on their homophobia.”

“I love seeing on Twitter when someone says I’m gay, and I say, ‘So what does it matter if I am? So be it. I hope you are not voting for me because you are making the presumption that I’m straight,'” he said in 2013.

Last month, though, he stressed that he is “heterosexual” in an interview with the Philadelphia Inquirer.

If elected, Booker will be the first vegetarian U.S. president.