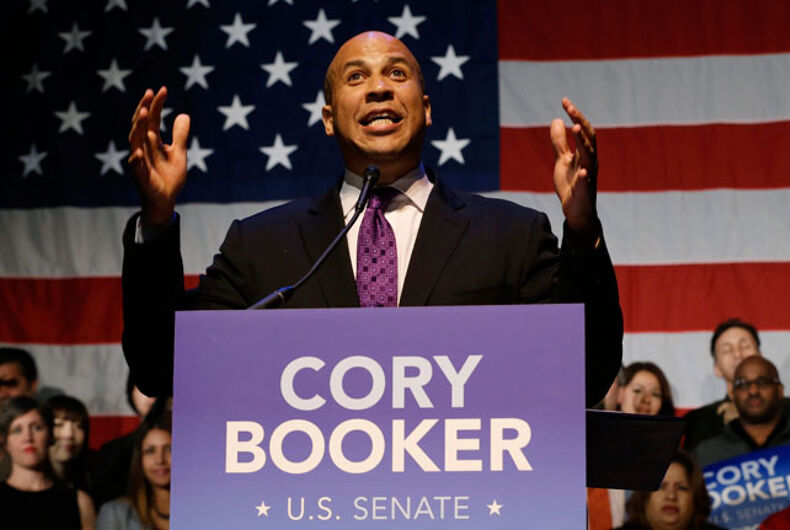 Booker is a likely contender for the 2020 Democratic presidential nomination, which would make him something of an oddity as he has never been married.

Only two people have been elected to the White House who were not ever married: James Buchanan and Grover Cleveland. Buchanan has long been the subject of speculation that he was gay, and Cleveland married during his first term in office.

“I’m heterosexual,” Booker told the Philadelphia Inquirer. “Every candidate should run on their authentic self, tell their truth, and more importantly, or mostly importantly, talk about their vision for the country.”

He also stressed that families come in different forms, including Donald Trump’s family: “Clearly the norms of family relationships have been changed dramatically as you’ve seen people across this country being elected to offices with all different kinds of family situations, including the president who has had three spouses.”

“I’m going to run on who I am, whether that’s running for reelection or running for president,” he said. “I’ve always trusted the voters enough to evaluate me on the content of my character, quality of my ideas, and my ability to do the job.”

Unlike Graham, Booker hasn’t talked about who will take up the role of First Lady so far because it’s not an important issue.

Also unlike Graham, Booker has a history of supporting LGBTQ equality. He has received a score of “100” in HRC’s Congressional Scorecard for the last six years.

Earlier this year during Senate hearings, Booker pressed Secretary of State nominee Mike Pompeo on whether he believed that being gay is a “perversion,” stressing the importance of not appointing a homophobe to a position of power.

The judge who struck down Obamacare hates LGBTQ people too