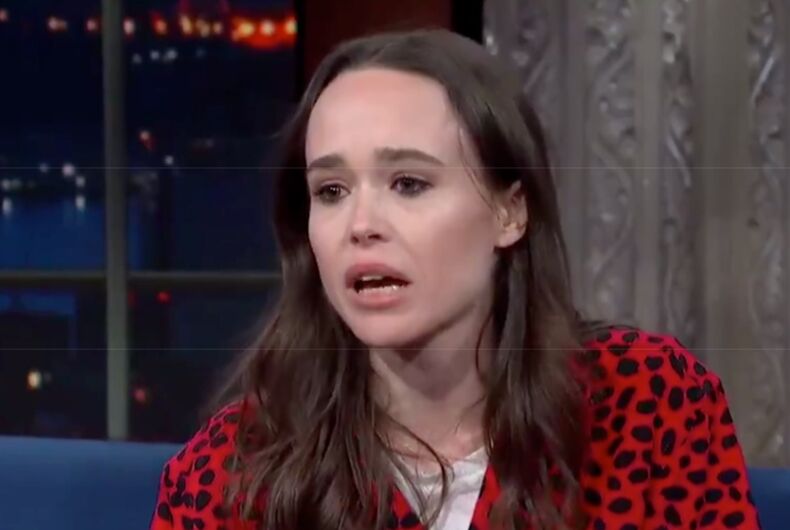 Ellen Page appeared on the Late Show with Stephen Colbert on Jan 31 and quickly launched into an impassioned takedown of the Trump administration's attacks on LGBTQ rights.Photo: Screenshot

Out actress Ellen Page’s appearance on The Late Show with Stephen Colbert has gone viral for her impassioned takedown of the Trump administration’s assault on LGBTQ rights.

The video is currently trending on Twitter as viewers react to her emotional and visceral comments about President Donald Trump and, especially, Vice President Mike Pence.

“Connect the dots. If you are in a position of power and you hate people and you want to cause suffering to them, you go through the trouble, you spend your career trying to cause suffering — what do you think is going to happen? Kids are going to be abused, and they’re going to kill themselves and people are going to be beaten on the street,” Page says after launching into a litany of Pence’s history of using government to attack the LGBTQ community.

“I am lucky to have this time and the privilege to say this. This needs to fucking stop.”

And then the audience erupted.

Watch below, but keep some Kleenex handy. You’re going to need them.

.@EllenPage is fed up with leaders who promote hatred and intolerance. #LSSC pic.twitter.com/apxXzye5SF

He killed a gay man in a vicious hate crime. This is his story of redemption.