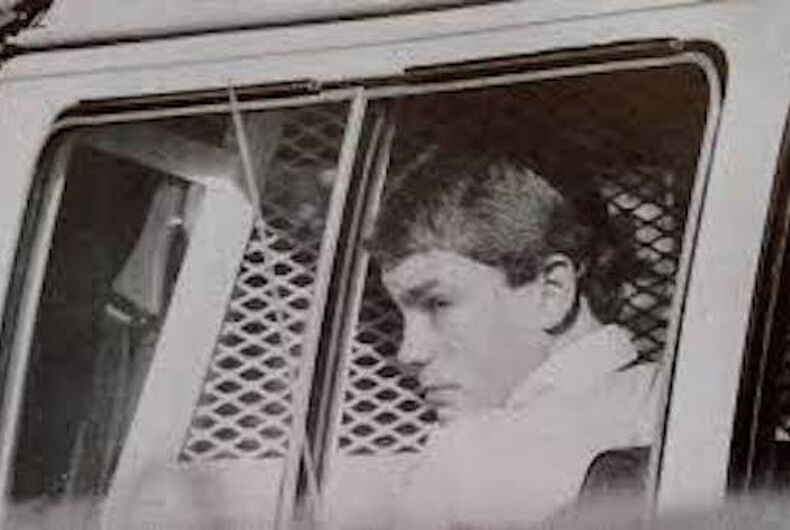 Jim Baines sits in police custody after being arrested for the murder of 23-year-old Charlie Howard.Photo: Provided

There are pivotal events in everyone’s life that forever separate before from after. For Jim Baines of Bangor, Maine, a pivotal event took place one July evening in 1984, when he and two friends attacked two gay men, killing one. The three assailants were convicted of manslaughter and sentenced to a youth detention center.

Ten year later, at age 25, Baines turned his life around, and is attempting to repay society for his crime.

On occasion, he takes a voluntary unpaid leave from his sales job at an electrical supply company in Bangor, and travels to schools with state police officers to talk to students about hate crimes. I caught up with Baines at Biddeford Middle School in Biddeford, Maine where he gave a presentation to an eighth-grade assembly.

The day was sparkling, with a hint of summer in the air. Over 100 students noisily entered a large music room with instruments and music stands scattered around. A teacher called the group to order saying, “I’d like to introduce two special guests – Detective Sergeant Mike Harriman of the Maine State Police and his guest, Jim Baines. They’re here to speak about some issues I think are relevant to us all – respect for each other, consideration, and tolerance.”

Sergeant Harriman began the presentation by defining “hate crime” as “a criminal offense motivated by bias against another person’s race, religion, ethnic origin, or sexual orientation.” He cited a couple of recent examples of crimes involving race at area high schools, and then showed two short videos – “Arresting Prejudice,” a police training film, and “Crimes of Hate,” a series by a local television station detailing Jim Baines’s story.

Baines, about five feet, nine inches tall with sandy hair then walked tentatively to the front of the room. The students were quiet and attentive as he spoke.

“The story I’m about to tell is true, very true,” he said nervously. “It’s about one night that changed my life drastically.”

For most of that July day in 1984, Baines, then 15 year old, had been drinking beer with two friends, Daniel Ness, 17, and Shawn Mabry, 16. That night, they took the car of one of the boys’ parents and drove around Bangor from party to party.

“As the night went on,” he said, “we ran out of beer. And it was during our quest for more beer that our problems began.”

Downtown, they drove across a bridge over a small stream and spotted two men walking arm in arm whom the teens recognized as local gay men. The two, Charlie Howard, 23, and Roy Ogden, 20, had just left a meeting of Interweave, a support group for gay, lesbian, bisexual, and transgender people sponsored by the Unitarian Universalist of Bangor.

The boys stopped the car, got out, and according to Baines, “began to push them around and really started to assault them,” demanding that they acknowledge their homosexuality. One of the gay men yelled to the other to run.

Ogden got away; Howard, however, tripped on a curb, falling to the ground near the railing of the bridge.

The three teens surrounded him, punching and kicking as he held onto the railing and screamed for help. One of the teens then gave the order to throw Howard from the bridge. When Howard heard this, he cried out in panic, saying he could not swim.

His plea only enlivened the boys, who dislodged Howard’s hands from the railing and, with a mighty heave, tossed him into the stream some 20 feet below. The boys then ran back to their car.

“We were feeling good, excited,” Baines told the students. “We thought it was a good accomplishment at the time, and we yelled and screamed as we drove off.”

Afterwards, they even bragged to a friend that they had “jumped a fag and beat the shit out of him, and then threw him into the stream.” The young women in the car, on the other hand, were quite upset and warned the boys that the man could have drowned.

At home later that evening, Baines had a hard time falling asleep. The next morning, the other boys woke him up and told him Howard had died.

Baines felt as if he had been plunged into a nightmare.

Soon, local police officers arrested him, Ness, and Mabry and charged them with murder. According to a report from the medical examiner, the cause of death was drowning, with acute bronchial asthma as a probable contributing factor.