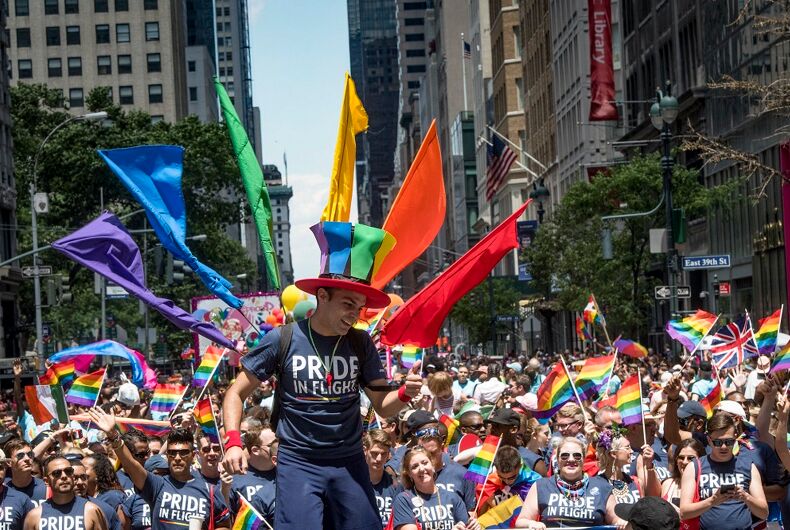 New York City might have two pride marches this year, the 50th anniversary of the Stonewall Riots.

For the past 20 years, pride in New York has been organized by Heritage of Pride (HOP). The organization has faced criticism in past years for the presence of corporate floats and campaigning politicians, the presence of uniformed police officers, and restrictions like metal barricades on the route and requiring anyone participating to have a wrist band.

So this year another group, the Reclaim Pride Coalition (RPC), has asked the city for a permit host a different march.

“Eschewing the corporate-saturated, highly policed nature of recent parades, the March is a truly grassroots action that mobilizes the community to address the many social and political battles that continue to be fought locally, nationally, and globally,” reads an RPC press release.

The RPC march would take place on June 30, the same day that the official New York City Pride March is scheduled, but would follow a different route that starts at the Stonewall Inn and go up 6th Avenue to Central Park.

The vision for the march is described on RPC’s website.

A commitment to the ongoing fight for LGBTQIATS+ rights worldwide

A march that highlights the most marginalized members of our community

A protest that recognizes the powerful legacy of the Stonewall Rebellion

A march that anyone can join, including from the sidewalks – everyone will have an equal place

HOP has said in the past that the corporate sponsorship is necessary to fund New York Pride. This year’s festivities will include over fifty events and a performance by Melissa Etheridge.

New York Pride is expected to cost around $12 million.

“The vast majority of the funding will come from corporations,” James Fallarino, communications manager for HOP, told the Washington Blade.

He said that organizers are expecting four million people to attend this year and that New York Pride will be World Pride to honor the 50th anniversary of the Stonewall Riots.

Many of the restrictions on participants, like the metal barriers, are set by police to keep large crowds out of the march’s path.

The City of New York has not yet approved either march’s permit.

He killed a gay man in a vicious hate crime. This is his story of redemption.