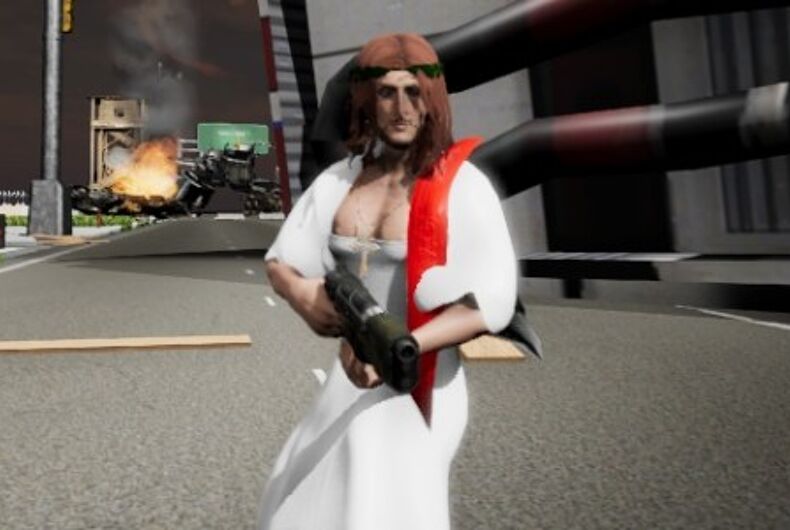 In December 2018 we mentioned Jesus Strikes Back: Judgement Day, a game in which people can control Jesus, Trump, Hitler or other world leaders and kill LGBTQ people, feminists and “illegal aliens.” At that time, the game was still under development, but now its “alpha version” is complete and available for purchase.

In the game, players can control avatars of the aforementioned men as well as Russian President Vladimir Putin, Italian dictator Benito Mussolini, Brazilian President Jair Bolsonaro or others

(Notice how the end boss is queer in three different ways and, thus, most worthy of death.)

Wary of press coverage on the game’s violent politics, the game’s creators have written:

JSB JD is a SATIRICAL PARODY…. JSB JD is not a political statement, testament or propaganda. JSB: JD satirizes political culture not through direct dialogue or humorous speech, but by allowing the player to play from the viewpoint of a collection of fictional characters representing satirical, “straw-man” depictions of political culture….

All individuals and characters that are featured in Jesus Strikes Back: Judgement Day are purely fictional, and any resemblance to real-world figures alive or dead is purely coincidental. Jesus Strikes Back: Judgement Day is simply a comedic video game and does not promote, advocate, condone or incite violence against any individual(s) based on gender, race, religion, nationality, political beliefs, or sexual orientation. THIS IS A GAME!

This video game does NOT advocate support or endorse ANY political group, ideology, movement, entity or individual(s). This video game makes NO comments whatsoever on political affairs, race, religion, sexuality, gender or real-world individuals or organizations at any time during gameplay.

But that claim rings hollow considering that most of the game’s playable characters are aligned with right-wing conservatism and most of its enemies are associated with left-wing and progressive causes. The very definition of “satire” requires a political target to be mocked, but its creators would like to pretend otherwise.

Related: You “win” a horrific new video game by shooting LGBTQ people in a nightclub

Even if the game’s creators think killing marginalized people is just a joke, that merely encourages players to see political violence as “funny” rather than a serious real-world problem that people actually die from. (Remember that U.S. hate crime rates have been raising for the last three years.)

By passing off their game as “satire,” the game still contributes to the problem, whether it means to or not.