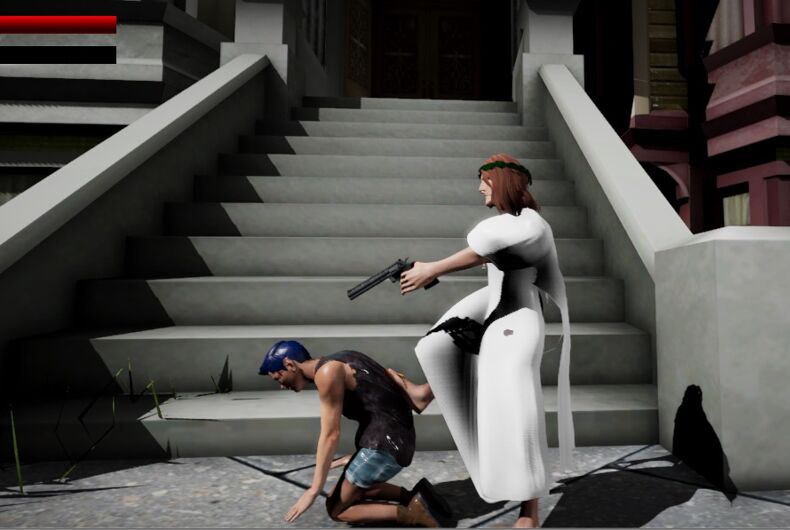 Jesus Strikes Back: Judgement Day will allow you to play as Jesus Christ and slaughter LGBTQ people and feminists.Photo: Screenshot

According to developers, a soon-to-be-released video game will allow you to play as Jesus Christ, Donald Trump, or Adolph Hitler in a battle against LGBTQ people, feminists and “social justice warriors.”

Other playable characters include Vladimir Putin and Benito Mussolini. The characters names are tweaked to resemble their actual names like “Dolph,” “Tromp,” or “Pootin.”

Jesus Strikes Back: Judgement Day will have an “alpha release” in late January according to the game’s website. But the over-the-top storyline and cheeky website have some people wondering if the “game” is just an attempt to troll both the left and the right.

With graphics resembling Grand Theft Auto, the game features the return of Christ to fight the New World Order set in place by progressives.

“The LGBT militants will attack anyone who is not a member of their military group,” according to the description for the “radicals.” “The LGBT Militia was formed after the world collapsed and are hostile towards all non-members. Alone they are weak, however, they can appear in large packs of up to 30.”

“With the complete downfall of worldwide civilization and the freedom, liberty and independence the free world once took for granted now nothing more than a distant memory, it is up to he without sin to cast thy first bullet,” the game’s description reads.

The developers addressed the doubt on their website, writing “Yes, this is a REAL game. This is not ‘bait’ or ‘trolling’. If you honestly believe that individuals would spend over ten weeks developing a game only to post screenshots and ‘troll’ to achieve absolutely nothing from it other than ‘trolling’ for the sake of it, well, I just don’t know what to say.”

“This is happening, this is in development, and this will be released whether you doubt it or not. Too much time and money from independent donors has been invested for this to be ‘bait’.”

Still, the snarky website also includes a supposed post from “Filipino Worker #2” giving a development update in mangled English. It also includes pieces with titles like “Why Trump may be Jesus” and “Jesus would have voted Republican.”

There are a lot of red flags that this is a publicity stunt and will never become a reality. But if so, are the troll(s) targeting the left or right? If they’re playing this for laughs, does it matter?