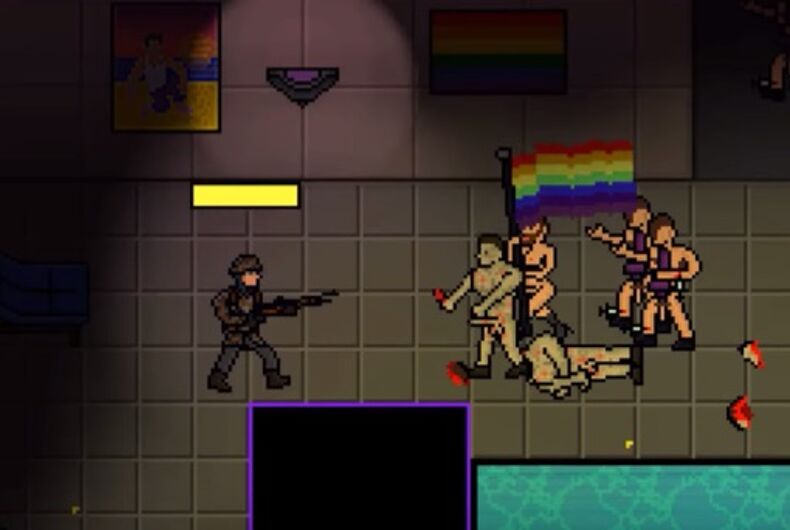 In Angry Goy 2, players have to shoot LGBTQ people in a Pulse-like nightclub to "win" the game.Photo: Screenshot

Editor’s Note: This story has been corrected to reflect that Cantwell did not create the game and is only promoting it. “FWIW, I would love to take credit for this magnificent creation, I just have too much integrity to claim credit for work I did not perform,” he said in the comments on this article.

A new video game promoted by “Crying Nazi” Christopher Cantwell is just as reprehensible as he is. In part of the game, players slaughter LGBTQ people in a Pulse-like nightclub.

Cantwell is an avowed white supremacist and neo-Nazi. He became a national laughingstock after he broke down in tears in a YouTube video after being told there was a warrant for his arrest for inciting violence in Charlottesville, Virginia during a white supremacist rally in 2017.

Cantwell has targeted LGBTQ Nation for abuse in other videos.

Cantwell’s game, Angry Goy II, is an update to the previous version that had players shoving Jewish people into ovens. This version allows users to target various minority groups – including LGBTQ people.

Related: Gay-hating neo-Nazi sobs like a baby after learning he’s wanted for arrest in Charlottesville

Players have to break into the nightclub, dubbed “LGBTQ+ Agenda HQ” to shoot gay and transgender people. Gay men are given large erect penises in the game to portray them as sexual predators. Posters outside the nightclub advertise “CHILDREN WELCOME.”

“Instead of taking out your frustrations on actual human beings, you can fight the mongrels and degenerates on your computer! Use guns, knives, pepper spray, and more! Lay waste to wave after wave of shitdicks, shitskins, shitstains, and the k—s they serve,” Cantwell writes in promotional copy for the game on his website.

“All White men should hunt down and mercilessly kill as many t—nies, f—-ts, n—–s, k—s, and cucks as they possibly can, in the new hit game Angry Goy 2!” Cantwell sent to Gab, a far right social network popular with white supremacists and neo-Nazis.