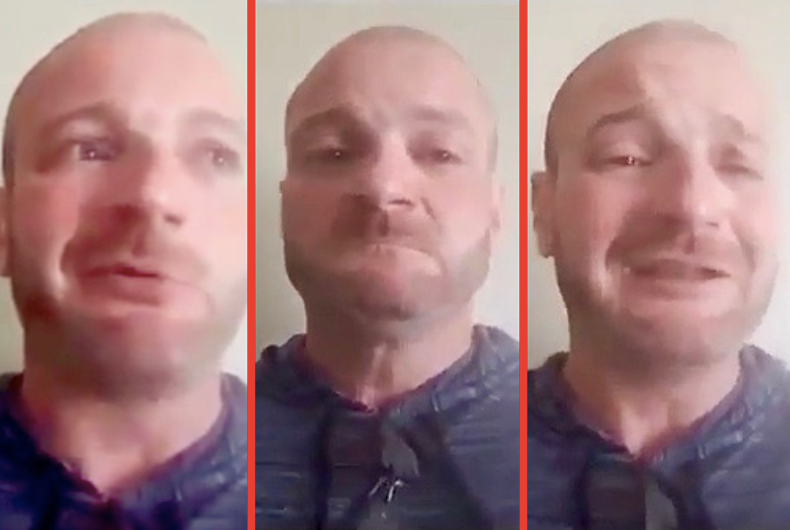 A few days after the rally, Cantwell learned there was a warrant out for his arrest after he was caught on video saying he had a pistol and was “ready for violence.”

He just posted a cellphone video on YouTube literally sobbing about being in trouble with the law.

“I have been told there’s a warrant out for my arrest,” he sniffles. “With everything that’s happening, I don’t think it’s very wise for me to go anywhere. There’s a state of emergency. The National Guard is here!”

(It should be noted, the reason the National Guard is there is because of guys like him.)

“I want to be peaceful. I want to be law-abiding. That was the whole entire point of this,” Cantwell continues. “I’m watching CNN talk about this as a violent, white nationalist protest. We have done everything in our power to keep this peaceful!”

Watch the pathetic video. Then scroll down for more.

In other Cantwell news: We unearthed a video of him and another homophobe from about nine months ago discussing their refusal to accept trans people. In it, they actually mention this site, LGBTQ Nation, by name.

The caller also openly speaks about wanting to violently beat gay couples. While Cantwell does indicate that he has tried to “get over the gay thing,” he does nothing to defuse the rhetoric or refrain from using trans slurs.

In fact, he says: “We’ve read things before from a blog titled ‘LGBTQ Nation‘ and I’m, like, OK, fine, if this is so fantastic then go start a nation out of it and see how that pans out for you. I don’t think that your population’s exactly going to thrive when everybody stops breeding.”

Disclaimer: This video is incredibly offensive and, given the extreme rhetoric, might actually be NSFW.