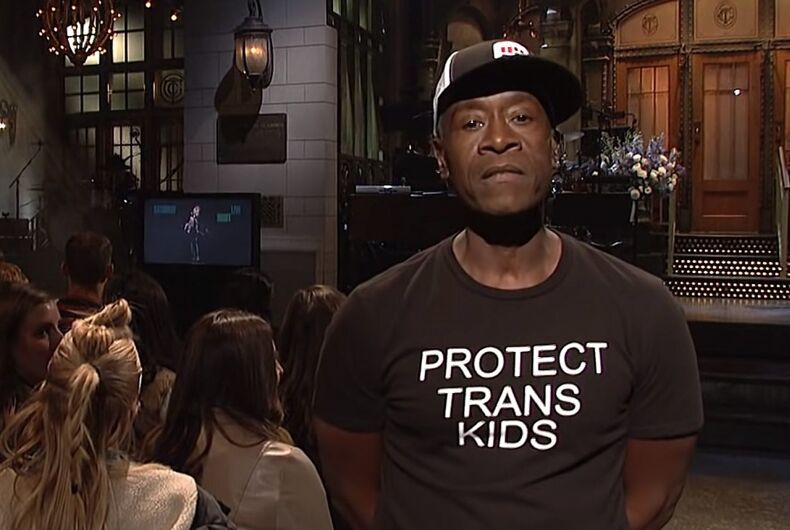 Don Cheadle may play a superhero in the Marvel Cinematic Universe, but during last night’s Saturday Night Live, the actor proved himself a real-world hero to transgender youth.

Cheadle, who hosted the show last night, introduced the evening’s musical guest, Gary Clark Jr., while  wearing a black t-shirt with the slogan “Protect trans kids” printed on it. While Cheadle didn’t make any other statement to accompany the shirt, his message was perfectly clear.

PROTECT TRANS KIDS
When heroes like @DonCheadle use their platform to acknowledge the humanity of (and the unfair discrimination against) trans kids,
lives are saved
It’s that simple💛🌈 https://t.co/NZr703bnOe

@DonCheadle I'm transgender and have friends working on #SNL. Thank you for wearing a #ProtectTransKids shirt on tonight's broadcast. You just climbed up the #Avengers rankings in my book and if you ever make it to Chicago for a con or I see you at a film fest, I'll say thanks.

Hey @DonCheadle, as a trans woman, I can't emphasize enough how much it means to see you do this on SNL. Thank you for standing strong with trans children. It means the world. https://t.co/MrsAyDNEso

Do you see this face?
DO YOU SEE THIS FACE?
This is his GAME face.
This is “Siguele, cabron!”
This is “You come for my kids, here I am.”
This is me.
God bless you, @DonCheadle #ProtectTransKids pic.twitter.com/dGyG4iQ5gH

Cheadle did react to the twitter response, thanking Saturday Night Live for the opportunity, and showing his love for all the support.

Cheadle has been in showbiz since the 1980s. As well as playing War Machine in the Marvel Cinematic Universe—including the upcoming Avengers: Endgame—Cheadle also currently stars in the comedy series Black Monday, about the 1987 stock market crash, on Showtime.

Trans people and trans youth in particular have faced an uphill battle over the last two years, as the Trump administration has rolled back civil protections, most notably public accommodation rights within the Department of Education under Betsy DeVos.

Many states have also attempted to pass laws opposing transgender student’s rights, including a current attempt in South Dakota to prevent teachers from discussing gender identity or expression in the classroom.

Cheadle also ended the show with another notable outfit change: in that case, he wore a sports jersey emblazoned with “CCCP”—the Russian acronym of the former Soviet Union—along with “Trump” in mock Cyrillic and the number 45, a reference to the president’s pro-Russian leanings.