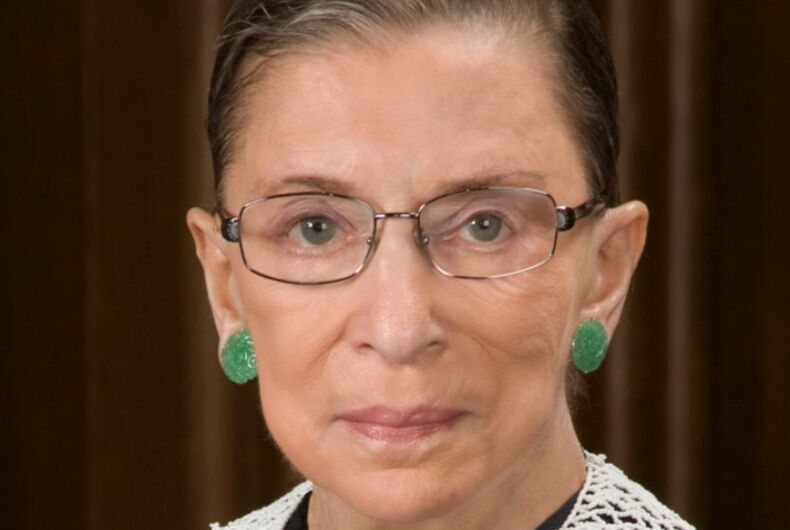 The Trump administration is already searching for someone to replace Supreme Court Justice Ruth Bader Ginsburg – and his supporters are jubilant about the possibilities.

Ginsburg announced in December that she had surgery to remove two cancerous growths from her lungs. Earlier this week, she missed oral arguments for two days at the Supreme Court, the first time she has missed courtroom arguments in her 25 years on the court.

Cancer surgeons have said, though, that several weeks of recovery is perfectly normal for the procedure.

This is the third type of cancer the 85-year-old judge has had. She is also a survivor of colon and pancreatic cancers, and she has a stent in her right coronary artery.

After her pulmonary lobectomy, her doctor said that there was “no evidence of any remaining disease.”

Related: Supreme Court Justice Ruth Bader Ginsburg is in the hospital & liberals are losing it

According to a White House source who talked to Politico, the Trump administration “is taking the temperature on possible short-list candidates, reaching out to key stakeholders, and just making sure that people are informed on the process.”

“They’re doing it very quietly, of course, because the idea is not to be opportunistic, but just to be prepared so we aren’t caught flat-footed,” the source said.

According to four sources, the White House has told conservative organizations like the Judicial Crisis Network and the Federalist Society to get ready for a noisy confirmation battle.

Republicans still hold a majority in the Senate.

Of course, conservatives on social media are celebrating her death.

Sounds like Ruth Bader Ginsburg is about to do the Supreme Court and America a huge favor and retire.

That will clear the deck for a solid, conservative female justice who will bring the high court a step closer to absolute constitutionalism.

Some even advocated killing Ginsburg.

Ruth Bader Ginsburg is leaving.
That is a fact.
The question is: When will they put her to sleep?
And when will they use her death to distract people from a major truth bomb?
If Comey/Mueller or anything related to FISA is about to come out, then she will be announced dead. pic.twitter.com/WJFIsWYryF

Rightwing conspiracy theorists, including the infamous Jacob Wohl, accused her of supporting pedophilia. This is a lie that has been debunked by Snopes.

Ruth Bader Ginsberg is a radical, regressive leftist. She has….
1. Advocated lowering the age of consent to 12.
2. Was against the Mann act that punished interstate sex traffickers.
3. Thinks prisons should be coed.
This is what the Left is clinging to?https://t.co/4fwnJPB06j