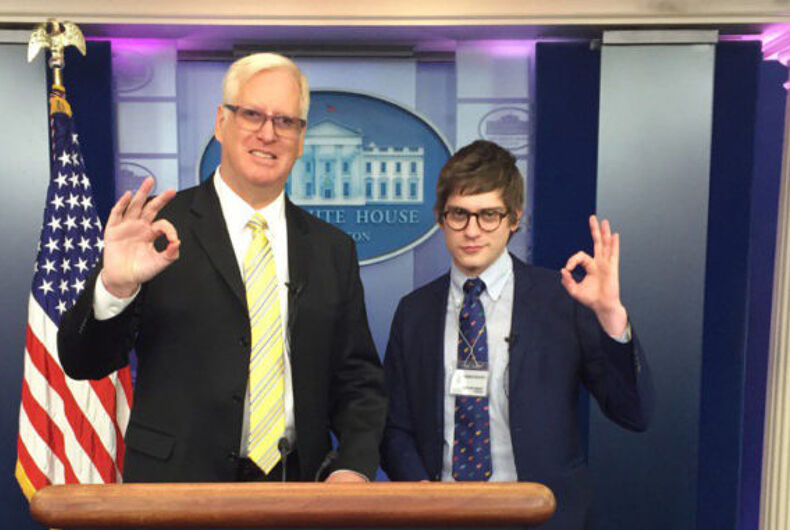 Gateway Pundit, the far-right fake news website founded and run by a gay man, Jim Hoft, has walked back accusations made against special counsel Robert Mueller after the FBI opened an investigation of those accusations. Hoft is frequently called “the dumbest man on the internet” for his wild conspiracy theories and constant mistakes.

The article included partly redacted documents that appeared to be from a mysterious firm known as “Surefire Intelligence.”

Today, that article has been replaced by an update saying that they are looking into “serious allegations” of wrongdoing as the FBI allegedly investigates whether the woman was paid to lie about the sexual assault.

Over the last few weeks, several political reporters were contacted by a woman who said that she was offered money to accuse Mueller – who is investigating the Trump campaign for possible collusion with Russia – of sexually harassing her in 1974 when they both worked at the firm Pillsbury, Madison, and Sutro.

In one email, she said that a man who said he worked for conservative lobbyist Jack Burkman contacted her and told her that he would pay her credit card debt, plus $20,000, if she would lie about Mueller.

Longtime LGBTQ Nation readers will remember Jack Burkman from his 2014 claim that he was working on legislation to ban gay men from the NFL.

Related: How Jim Hoft, the ‘Dumbest Man on the Internet,’ aided the Russian election plot

The Hill Reporter tried to investigate her claim, but she gave either a fake name or a fake home town, and after a reporter tried calling her he got a text message that said, “You’re in over your head…. Drop this.” The message included the home addresses of two editors at the Hill Reporter.

They also got a threatening phone call from someone who said he worked at “Surefire Intelligence,” a firm that NBC News reports is connected with disgraced hedge fund manager and Gateway Pundit writer Jacob Wohl.

Wohl denied any involvement with Surefire Intelligence, but Burkman told the Hill Reporter that Surefire is a “real company” that does “a lot of good research” and is run by Wohl.

NBC News contacted the firm formerly known as Pillsbury, Madison, and Sutro, and found that no one with the name the woman gave had ever worked there, nor did any work there under the maiden name she gave.

This past Tuesday, Burkman posted a video to Facebook claiming that he would hold a press conference in two days with a woman who would make a “credible” accusation of sexual assault against Mueller.

Related: A gay blogger sent the web howling after the wrong guy following the Vegas shootings

NBC then reported that Mueller had heard about the possibly false accusations and turned the matter over to the FBI.

So today, Hoft replaced the original post with this update:

Earlier today we were given information on accusations against former FBI Director Robert Mueller.

We took the documents down and we are currently investigating these accusations.

There are also very serious allegations against Jacob Wohl.

We are also looking into this.

There is still a press conference scheduled for Thursday at noon in Washington DC.

We plan on attending this press conference and will report an update at that time.

Update: We spoke with Jacob and we are interviewing him tomorrow.

UPDATE: We also spoke with Jack Burkman on Tuesday evening.

The press conference is on for Thursday.

But if the accusations are true, Burkman is behind some major wrongdoing in an effort to derail an FBI investigation with the cynical assumption that women who accuse men of sexual assault and harassment are just trying to ruin their reputations.

And Hoft, well, he was just proven to be an idiot once again.