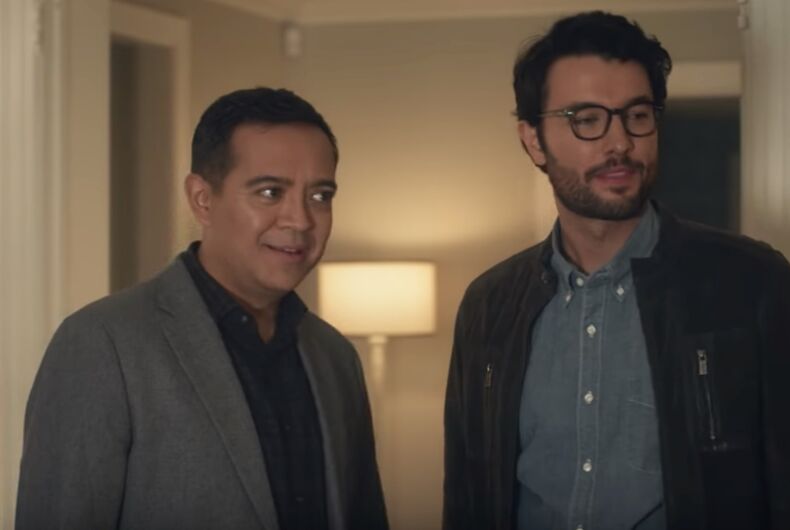 This gay couple in an AT&T commercial has an evangelical hate group up in arms.Photo: Screenshot

The company’s “Just OK” campaign is meant to convince consumers that their product is better than their competitor’s “okay” offerings, but LaBarbera says it’s not okay at all.

First the far right extremist and head of American for Truth About Homosexuality, takes issue with interracial couples.

“Anyone with a pulse who watches TV should have noticed by now that the ad business is engaged in heavy-handed promotion of interracial couples. (It seems as if 90 percent are interracial.),” LaBarbera writes on the AfTAH website.

And since the interracial couple is gay, LaBarbera’s knickers are twisted.

“Now throw sexual perversion into the mix,” he adds. “Hollywood and Corporate America have been working overtime for years to normalize homosexuality and gender confusion, and it’s only going to get worse.”

“There is so much corporate pro-homosexual and pro-transgender propaganda these days that it’s hard to keep track of it all.”

“’Gay power’ in our declining culture is stronger than ever, but I have to believe that the vast majority of Americans–if they gave it serious thought–still would have the common sense to admit that it’s a bad idea to encourage the formation of homosexual-led households that, by design, deny the affected children either a mom or a dad,” LaBarbera bellowed.

In reality, polling shows just how out of step the hate group leader and his followers are. The majority of Americans support same-sex marriage and think LGBTQ people should be protected from discrimination.

The US Census Bureau reported last year that 10.2 percent of Americans are in a mixed race marriage. That would be over 32 million residents.

ISIS threw gay men off a tower to execute them. Now the building is being destroyed.