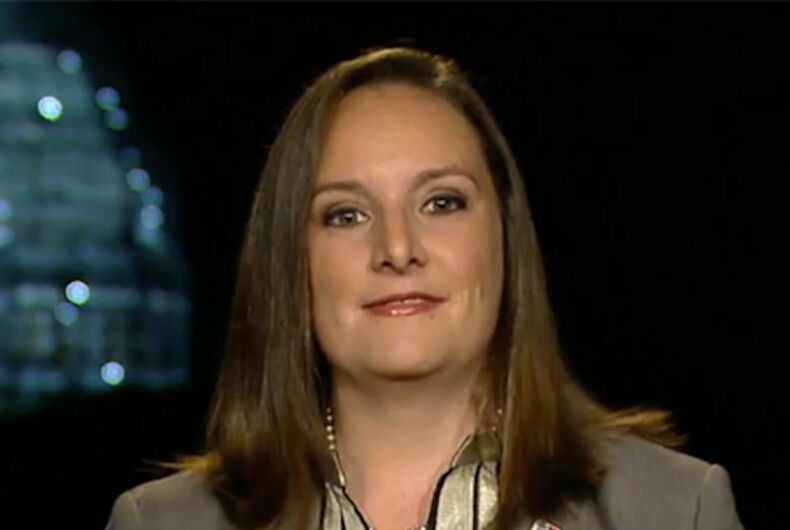 In an interview with TheHill.com, Henry said, “I think there’s a lot of ups and downs in the last two years with some of the administration’s actions…. We’ve seen a few hiccups here and there’s how [same-sex marriage has] been rolled out with the military, with the State Department, visas, and how they handle married LGBT partners and non-married LGBT partners for diplomats. ”

“Some of the issues where we can make major improvements are just the nuances,” she said.

In the same interview, Henry initially praised Trump, stating, “He has been more vocally supportive than any Republican candidate or president.” But her praise is wildly misplaced.

Related: Trump’s latest con is that he just protected LGBTQ rights. He didn’t.

It’s true that during his acceptance speech at the 2016 Republican National Convention, Trump said, “I will do everything in my power to protect our LGBTQ citizens from the violence and oppression of the hateful, foreign ideology, believe me.”

This “ideology” was a none-too-veiled reference to the Islam faith, a religion he has repeatedly targeted for discrimination.

Thank you to the LGBT community! I will fight for you while Hillary brings in more people that will threaten your freedoms and beliefs.

However, Trump’s 2016 speech said nothing about protecting queer Americans from a hateful domestic ideology. Since his election, Trump has steadily rolled back trans rights, seated anti-LGBTQ figures throughout the government and supported Christian discrimination against LGBTQ people.

Henry has only been the LCR’s executive director for barely a month, but the group has long been impotent against Republican queerphobia. They endorsed 14 anti-LGBTQ Republicans during the 2018 midterm elections including the very anti-gay Brian Kemp of Georgia.

The only remotely useful accomplishment from the LCR in the last few years was airing an ad against anti-LGBTQ accused child molester Roy Moore during his campaign to become Alabama’s U.S. Senator.

Would a midwestern Democrat be perfect to oppose Trump in 2020?