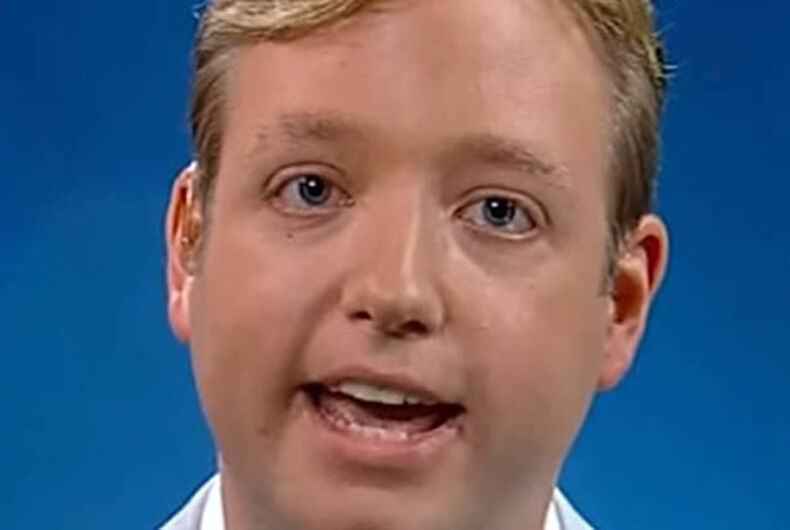 It took the rollback of guidelines to the nation’s schools, rescinding protections for transgender students nationwide, for the Log Cabin Republicans to apparently see what nearly every other LGBTQ American has already concluded about President Trump and his administration: they do not have our community’s interests at heart.

As the Gaily Grind reported, the group’s president, Gregory T. Angelo, revealed at CPAC last month that his he and his fellow gay conservatives were disappointed with the president’s action.

“Log Cabin Republicans had supported the Obama administration guidance on transgender public accommodations in public schools and certainly opposed any efforts to rescind it,” Angelo told NowThis at last week’s CPAC conference. “We are disappointed that President Trump had.” Angelo subsequently confirmed that feeling in a phone interview with LGBTQ Nation.

That is quite a reversal from October when Angelo sang Trump’s praises — despite withholding an official endorsement.

“Mr. Trump is perhaps the most pro-LGBT presidential nominee in the history of the Republican Party. His unprecedented overtures to the ‘LGBTQ community’—a first for any major-party candidate in our nation’s history—are worthy of praise.”

Now, not so much.

Angelo did, however, take issue with the Gaily Grind’s account that his remarks to Now This came “after days of silence.”

“That is not only erroneous but personally hurtful to me,” Angelo told LGBTQ Nation by phone Thursday. “I was on the ground at the Conservative Political Action Conference working with our transgender members who were in attendance, doing advocacy work as the bravest of the brave.”

Angelo revealed that despite his disappointment, the LCR is not giving up. “We are going to be engaging in a more formal process, making suggestions to the Departments of Education and Justice as to how they can handle this situation in a way that guarantees the safety and equality of transgender students,” Angelo said, adding, “and all students.”

When asked why he thought the administration would listen to these suggestions, Angelo pointed to the decision by the president to not rescind an Obama-era executive order, protecting LGBTQ federal contractors from gender and sex discrimination, that Ivanka Trump and her husband Jared Kushner reportedly took credit for, and now Angelo is saying was also due to the LCR’s influence.

Angelo said just as the trans community by and large supported the fight for marriage equality, he was pressing for transgender members of the LCR to lead their next engagement with the administration, starting Friday. “I think it’s time that we now return the favor and play a supporting role, and showcase the stories and advocacy of transgender Americans and we are starting to do that with our organization.”

When asked if he was turning to Caitlyn Jenner for help, after she recently denounced Trump’s rollback as “a disaster,” Angelo was clear: “Being a transgender advocate does not require someone to be a multimillionaire or have a number of Olympic medals.”

He named Jordan Evans, Jennifer Williams, and Gina Roberts as three of those transgender Republican names who will be in the news Friday at the forefront of this effort. Evans and Williams were recently profiled by ThinkProgress. Angelo told LGBTQ Nation that, working together with these trans Republicans, he felt this initiative would succeed.

“I’m confident that we will be able to propose a common sense conservative answer to this hotly debated topic, one that takes into consideration the perspective of Republicans and the center right, while at the same time, still advocating for the full equality of transgender students and all transgender Americans, and one that does not allow for any separate but equal status.”

Proposing it is one thing. Winning over those forces within the administration controlled by the religious right is a far more difficult challenge.

Angelo, like out writer Chadwick Moore and entrepreneur Peter Thiel, has been among a strong but small contingent of gay conservatives willing to speak up in support of the president, to the dismay of religious right leaders, who are not exactly welcoming them with open arms.

Evangelist Franklin Graham said last month gay Christians aren’t normal people, they’re “the enemy” and they must be stopped from “influencing the children.”

Oprah for President is now a possibility, cue Twitter exploding with joy