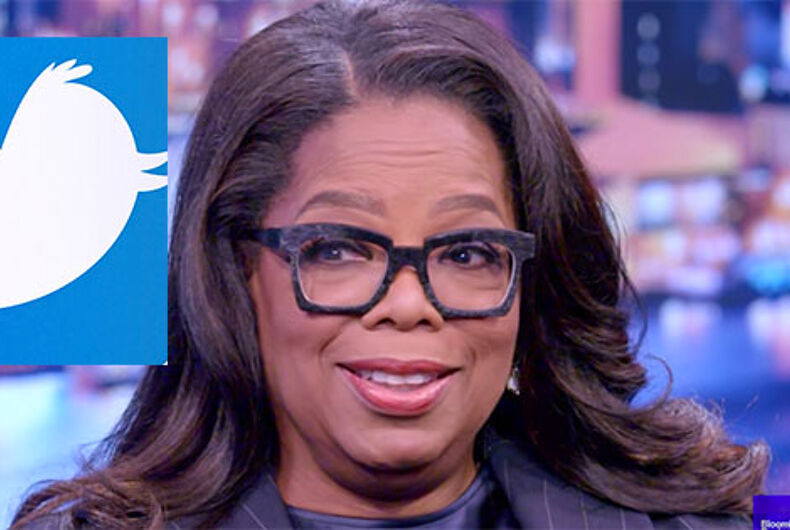 If Donald Trump can be president of the United States, why not the most famous female television personality of all time?

“I never considered the question even a possibility,” Oprah Winfrey told David Rubenstein on Bloomberg TV, when asked if she’s now considering a run for the White House in 2020. “I thought, ‘Oh gee, I don’t have the experience, I don’t know enough.’ And now I’m thinking, ‘Oh! Oh!'”

And based on reactions, from MSNBC online polls to tweets and Facebook shares, “O!” might just be what America is looking for after what the current president has already dubbed “The Trump Era.”

CBS Late Show host Stephen Colbert is already on board:

Goodnight, everyone! C’mon @Oprah, how about running for office? #Oprah2020 #LSSC pic.twitter.com/HbM1OCafbZ

And they’re not alone in expressing excitement about what a “win” Winfrey would be for progressive causes:

U GET HEALTH CARE. U GET EQUALITY. U GET UR RIGHTS BACK. EVERYONE CAN ENTER THE U.S #OPRAH2020 pic.twitter.com/oq7vMaHnMD

Oprah may run for President and she couldn't have picked a better time! RETWEET if you would vote Oprah in 2020 #WeArePP #WomensHistoryMonth pic.twitter.com/cRksp6VzI2

"New Trump" ??? No. But here's your next black President for 2020!#Oprah2020 #TrumpRussia#resist pic.twitter.com/CioMYhQeoL

More than a few people chimed in to say, “CALLED IT.”

Don't forget: Aaron McGruder and The Boondocks called this eleven years ago (even though the date is wrong) #Oprah2020 pic.twitter.com/tHqoJNSbZt

And just imagine if Oprah teamed-up with someone who has eight years of White House experience, perhaps a former First Lady? No, not Hillary Clinton:

Even the Log Cabin Republicans get it now: They’re ‘disappointed’ in Trump