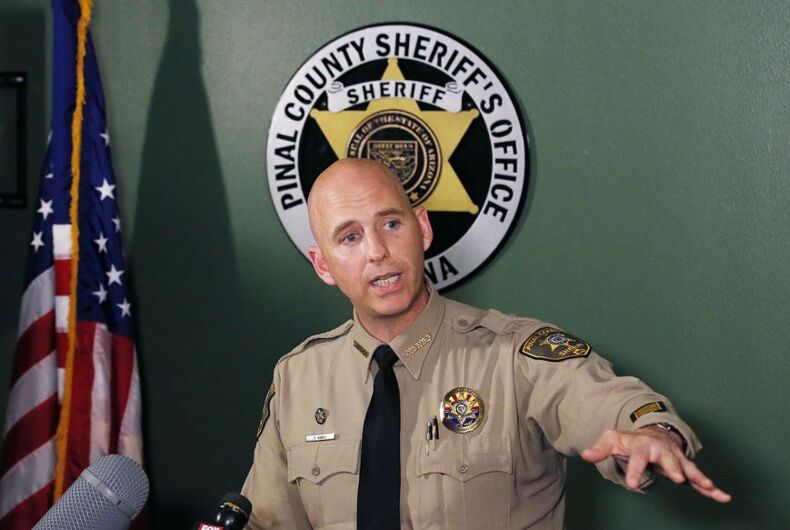 One of President Donald Trump’s candidates to head up the federal Customs and Border Protection agency is a former sheriff with a long history of scandal who is currently under investigation by the FBI.

Paul Babeu was Pinal County sheriff for eight years, until Jan. 1 of last year, and his former agency’s use of RICO funds, or money and assets seized during criminal investigations, appears to have raised red flags, leading to questions from federal agents, Vocativ reports.

The FBI seized an unknown number of items from the Pinal County Sheriff’s Office on Feb. 24, authorities confirmed to PinalCentral.

Police spokesperson Navideh Forghani said the items, cellphones and hard drives, that were taken belonged to the previous administration, under Babeu.

The publication notes that the action “comes months after an organization with ties to PCSO was subpoenaed by the FBI.”

Sheriff Mark Lamb replaced Babeu in January and called the budget left behind for him “crap,” saying the amounts given to the Arizona Public Safety Foundation were problematic. The non-profit organization raises money for law enforcement and other first responders.

Critics suggest that the money given to the group was really a “slush fund” for Babeu and his former department.

The American Civil Liberties Union filed a lawsuit in 2015, essentially alleging that the money was being laundered through APSF and funneled back into the police department.

“At a minimum, it seems that by funneling money to a private group which buys things for him and his department, Defendant (Sheriff Paul) Babeu is able to avoid procurement laws and other transparency regulations which usually apply to government purchasing,” reads a complaint from the ACLU.

Babeu, a Republican, came out as gay in 2012 after news broke of a relationship he was having with Jose Orozco, a man who was illegally in the country at the time. He said Babeu threatened him with deportation if he revealed that they were in a relationship, a charge the former sheriff denies.

The scandal caused Babeu to drop his bid for U.S. Congress. His sisters have been vocal in their opposition to him, with one, Lucy Babeu, claiming she found her brother living with a young man who was a student at a school where he was the headmaster and executive director from 1999 to 2001.

The DeSisto School, in Massachusetts, was the home of rampant physical and sexual abuse. A state investigation found evidence of physical abuse and that students “strip searched” each other and “routinely took group showers,” “leading to sexual abuse.”

An investigatory piece by ABC 15, in Phoenix, Arizona, turned up video of Babeu bragging about and defending abusing students at the unlicensed boarding school.

He claimed he did not know of the abuse and was not involved, threatening to sue if a retraction was not issued. The video, however, proves otherwise.

Babeu is considered a hardliner on immigration policy, and even featured in a famous John McCain campaign commercial in 2010, advocating for a border wall.

Oprah for President is now a possibility, cue Twitter exploding with joy

Now there are 7: Jaquarrius Holland is the latest transgender woman murdered